Can You Volunteer for a Nonprofit? We’re Bringing The Standard’s 2015 Volunteer Expo to You!

Portland, September 10th, 2015. If you couldn’t join the thousands who flocked to Pioneer Courthouse Square for The Standard’s Annual Volunteer Expo, you’re in luck. We’ve got all the information and website links to explore over 125 local nonprofits that could use your time.

A full list of links of nonprofits is at the bottom of our story. The Standard’s Volunteer Expo has repeat participants year after year, here’s a look at some nonprofits which continue to recruit volunteers: Jenny Bedell-Stiles and Andy Meeks from Friends of Trees New Avenues For Youth volunteers are a hit every year because they dish out the free Ben and Jerry’s Ice Cream! The Volunteers of America recruited some new volunteers! Special Olympics Oregon has room for coaches and event volunteers. The YMCA was handing out information about programs. People who stopped by The Q Center booth were met with a friendly smile. Reps from the Feral Cat Coalition of Oregon explained their work on behalf of local cats and kittens. 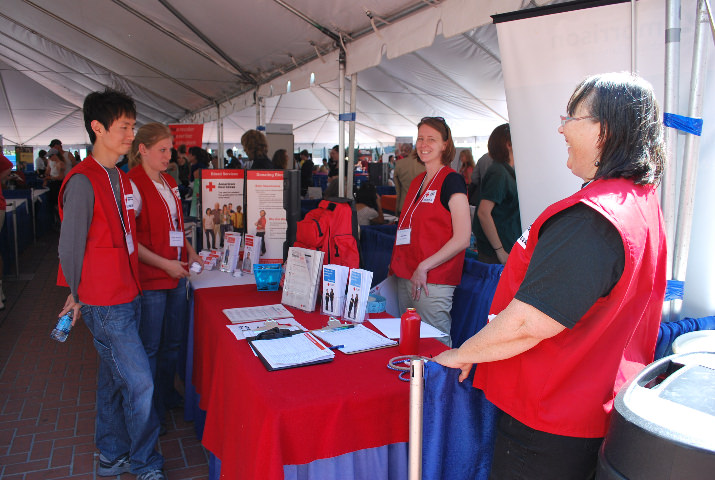 The mission of the Make-A-Wish Oreogn Foundation® is to grant the wishes of children with life-threatening medical conditions to enrich the human experience with hope, strength and joy. Northwest Pilot Project began in 1969 as an all volunteer agency to provide basic supports for seniors at risk of losing their ability to live independently. Camp Fire offers opportunities for volunteers who like to work with kids. Here’s a list of links to charities at the The Standard’s Volunteer Expo. Please consider donating your time, and tell them PortlandSocietyPage.com sent you! Portland, August 1st, 2013. The Regional Arts & Culture Council announced on Thursday evening that the seventh annual Work for Art campaign raised $761,359, bringing its seven-year total to $4,686,681 raised for local arts organizations. More than 1,900 donors participated in the campaign that began on July 1, 2012 and ended on June 30, 2013, mostly through payroll deduction and other gifts in the workplace.

The campaign results were delivered by Jeff Harvey, president and CEO of Burgerville, at a special reception Thursday evening in the KeyBank Club at Jeld-Wen Field. Harvey was the honorary chair of the 2012-13 campaign, and will lead the 2013-14 campaign as well, with co-chair Mike Golub, COO of the Portland Timbers.

“It is a great thing to celebrate arts and culture in our communities,” said Harvey in thanking all those who participated in the campaign. “In today’s business world… there’s no such thing as too much creativity or too much innovation. Investing in a vital arts community is the same as committing to deep and long-term investment in the vitality and innovation of business.”

More than 75 participating companies were acknowledged on Thursday evening, including the top ten Work for Art campaigns in 2012-13:

Portland General Electric was the top campaign for the second year in a row, increasing their campaign by 6% for a total of $83,530; President and CEO Jim Piro accepted the company’s award and said that PGE employees were enjoying more arts activities thanks to the Arts Card, a benefit of giving to Work for Art. Jack Graves, Chief Cultural Officer at Burgerville, accepted the “top participation” award for the sustainable restaurant chain, which had the most employee donors (410) of any company. Portland Center Stage was acknowledged for raising the most money among nonprofit organizations ($2,442); the award was accepted by development director Charlie Frasier.

The results reported on Thursday night are down 7.7% from the 2011-12 campaign total (and all-time high) of $824,648. A variety of factors contributed to the downturn, including general anxieties about the economy last fall, and typical fierce competition for contributions during a presidential election cycle. Work for Art leaders remain confident that the campaign will rebound in 2013-14; already several new companies have signed up to participate this year, including Cambia Health Solutions, Gerding Edlen, and Tri-Met. Other company leaders who would like to learn about conducting an employee giving campaign for the arts and culture sector are invited to contact Kathryn Jackson, Work for Art Manager at 503-823-5424 or [email protected].

Work for Art is a program of The Regional Arts & Culture Council (RACC), which distributes 100% of all proceeds to more than 100 arts and culture organizations based in Clackamas, Multnomah, and Washington counties through a competitive grant application process. Although Work for Art is primarily a workplace giving program, anyone can participate by making a donation online at workforart.org. The strength of the campaign has been in its ability to accumulate a high volume of smaller gifts; most donations are $150 or less, and $60 is the amount most commonly donated. Donors who pledge $60 or more receive an Arts Card. Most donations are matched dollar-for-dollar by a matching challenge fund that includes contributions from The City of Portland, Clackamas, Multnomah, and Washington counties, the Firstenburg Family Foundation, Sunshine Dairy Foods, and other private donors.