Seattle to Portland, July 14th. Fifteen cyclists peddled 204 miles over two days to raise $25,587  for the Cascade AIDS Project. Ride4CAP is in its 2nd year of raising funds and its first year as a supported cycling team.

“CAP has been looking to add another way folks can get involved in the fight against HIV/AIDS,” said Michael Kaplan, CAP’s Executive Director and an HIV-positive man. “Portlanders are known for their penchant for cycling, and this allows us to enter the foray of rides as a first effort and eventually create our own ride. We want to ensure on this ride that all know CAP is here to help with testing and linkage to care. Everyone has a status, everyone needs to know theirs. Funds raised here will help us to help others.” 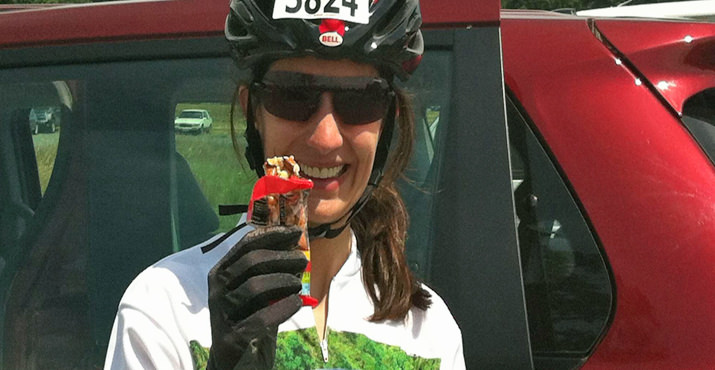 Laura Bancroft refueled for the ride. At no other time has there been more hope for ending the HIV epidemic than today. Funds are the major barrier to making the disease a thing of the past. As reported on National Public Radio on July 12, 2012, the May 2011 National Institutes of Health (NIH) study suggests there is hope for an end to HIV’s spread if people (1) know their HIV status by getting tested regularly, and (2) access care if diagnosed positive. The study is available here: http://www.niaid.nih.gov/news/newsreleases/2011/Pages/HPTN052.aspx.
“I believe it is my duty to ride,” said Benjamin Gerritz, avid cyclist and an HIV-positive man. “I love to ride; I have been blessed with good health because of the excellent medical care I receive and the life I have chosen to live. I am honored to ride with my fellow Ride4CAPers.”
Sponsors for the team included Nike, Central Drug and KINK FM. The team used the Cascade Bicycle Club’s ride as their vehicle for spreading the message of HIV/AIDS prevention and stigma reduction as well as a fund raising tool. The ride started at the University of Washington Campus in Seattle, ended its first day, July 14th, in Chehalis, Washington and picked up on the 15th to end at Holladay Park in Northeast Portland.

About Cascade AIDS Project Incorporated in 1985, Cascade AIDS Project (CAP) is the oldest and largest AIDS Service Organization in Oregon and Southwest Washington. Our mission is to prevent HIV infections, support and empower people affected and infected by HIV/AIDS, and eliminate HIV/AIDS-related stigma.
With a staff of more than 50, and a volunteer corps that includes over 700 individuals providing more than 29,000 hours of service each year, CAP manages a diverse array of programs and an annual budget of $4.9 million. Fifteen percent of CAP’s staff are individuals living with HIV, 25% identify from communities of color, and 30% are bilingual. Our programs serve the broad and diverse set of communities impacted by HIV, from community-specific programs focused on teens, Latinos, the gay community, individuals and families living with HIV, to the thousands of individuals throughout the state who seek education though our AIDS/STD hotline each year. A committed 16-member volunteer Board of Directors provides strategic guidance and oversight to ensure CAP accomplishes its mission and continues to operate with integrity and transparency. www.cascadeaids.org.