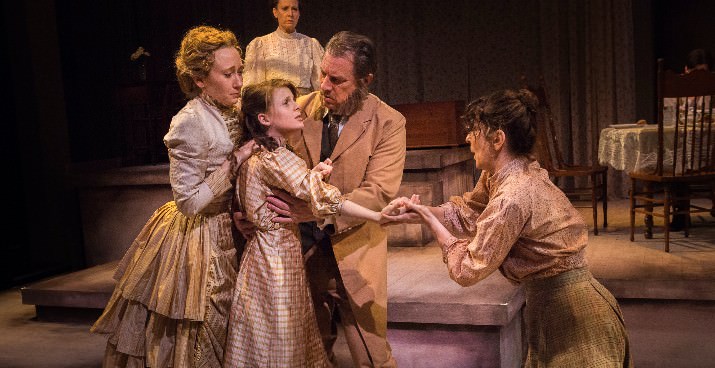 Salem, OR. “We often hear that operating support is the most important type of award,” said Arts Commission Chair Jenny Green. “Especially now, as arts organizations struggle to recover from losses caused by the pandemic, these awards help relieve a bit of the economic pressure.”

Grants totaling $1,265,166 will be distributed to 154 Oregon arts organizations through the Oregon Arts Commission’s fiscal year 2022 Operating Support Program. Including Artists Repertory Theatre (A.R.T), which received $10,490. Seen above is a photo by Owen Carey of A.R.T’s production of The Miracle Worker. There are six more recipients than in the fiscal year 2021 due to a growing number of eligible organizations. Ranging from $2,000 to $ 25,000, the grant awards are available to nonprofit organizations with arts at the core of their mission and budgets over $150,000. One of the largest grants was one made to Oregon Symphony for $25,000.

In 2019 organizations receiving Operating Support from the Arts Commission expended $213 million, employed 11,681 FTE and produced events and activities that were attended by close to 3.7 million people. *Organizations with budgets under $150,000 are eligible to apply to the Small Operating Program. This program funds an additional 109 arts organizations.

The fiscal year 2022 Operating Support Grants, in the Portland Metro area were awarded to the following nonprofits:

From The Oregon Arts Commission:

The Oregon Arts Commission provides leadership, funding and arts programs through its grants, special initiatives and services. Nine commissioners, appointed by the Governor, determine arts needs and establish policies for public support of the arts. The Arts Commission became part of Business Oregon (formerly Oregon Economic and Community Development Department) in 1993, in recognition of the expanding role the arts play in the broader social, economic and educational arenas of Oregon communities. In 2003, the Oregon legislature moved the operations of the Oregon Cultural Trust to the Arts Commission, streamlining operations and making use of the Commission’s expertise in grantmaking, arts and cultural information and community cultural development. The Arts Commission is supported with general funds appropriated by the Oregon legislature and with federal funds from the National Endowment for the Arts as well as funds from the Oregon Cultural Trust. More information about the Oregon Arts Commission is available online at: www.oregonartscommission.org.

Portland, OR. After a four year search and evaluation of over 700 possible music professionals, the Oregon Symphony announced that Austrian-born conductor David Danzmayr will serve as its next Music Director. Current Music Director, Carlos Kalmar will move into an advisory position with the organization after 17 years at the helm. Because of the pandemic, symphony concerts have been canceled through June. But Scott Showalter, Oregon Symphony president, says the orchestra should be back in the fall. “We will reunite in-person with our community in Fall 2021, as we celebrate our 125th anniversary with adventurous new programming and exhilarating performances.”

Regarded as a gifted conductor, Oregon Symphony describes its new Music Director, David Danzmayr as, “a creative leader with a unique artistic vision, reflecting his desire to embrace wide-ranging cultures while inspiring and challenging audiences.”

Danzmayr was strongly influenced by Pierre Boulez and Claudio Abbado in his time as conducting stipendiate of the Gustav Mahler Youth Orchestra and by Leif Segerstam during his additional studies at the Sibelius Academy. Subsequently, he gained significant experience as assistant to Oregon Symphony Music Director Laureate Carlos Kalmar, Neeme Järvi, Stéphane Denève, Sir Andrew Davies, and Pierre Boulez, who entrusted Danzmayr with the preparatory rehearsals for his own music.

the Oregon Symphony is the oldest orchestra in the western United States.

Here is a video about this new chapter in the life of the Oregon Symphony.

The multi-Grammy Award-nominated Oregon Symphony ranks as one of America’s major orchestras. Led by Music Director Carlos Kalmar, it serves more than 235,000 people annually through live concerts and award-winning education and community engagement programs.  The Oregon Symphony has broken attendance and fundraising records in recent years, while innovating on stage through new series such as SoundSights, Sounds of Home and SoundStories. Additionally, syndicated programming for broadcast reaches tens of millions of people throughout the world. As 2021/22 will mark its 125th anniversary, the Oregon Symphony is the oldest orchestra in the western United States. For more information, visit www.orsymphony.org. Portland, OR. It was a soggy but exuberant start to the Oregon Symphony 120th anniversary season as 76 professional musicians, and Music Director Carlos Kalmar, took to the Waterfront Park stage for an annual free concert. (We’ve got all of the details for the upcoming season below.) Sgt. Richard Botta of Portland Light Artillery Command expained to Dave Salesky KATU how his team sets off the howitzers at just the right time for the 1812 Overture.

The 2016/2017 season offers more than 80 Classical, Pops, Kids, and Special Concerts. It runs from September through May.

This month, the Symphony launchs its SoundSights Series, in which the Symphony collaborates with some of the Pacific Northwest’s finest artists to bring an extraordinary visual element to the stage. It starts in September with Bluebeard’s Castle, a dark and mysterious opera with sculptures by world-renowned glass artist Dale Chihuly. In December, video artist Rose Bond and her team will transform the walls of the Schnitz into an animated backdrop for Turangalîla, a symphonic dance of love and joy. Next spring, master stage designer, costumer, and puppet maker Michael Curry will mount magical scen­ery for Stravinsky’s Perséphone, a musical version

Hers’s a list of some of the Oregon Symphony offerings for the 2016/2017 season:

Click to Learn more about the subscriptions and packages.

The Oregon Symphony currently has 76 professional musicians on contract, and is led by Music Director Carlos Kalmar. Each year it engages dozens of guest conductors and artists, both popular and classical, to perform with the orchestra. The organization’s operating expense budget was $16.2 million in FY ’15, of which just over 78% was spent on programs.

The Oregon Symphony is managed by a full-time staff of 37 who are responsible for concert production, marketing, public relations, education, community engagement, fundraising, customer service, accounting, and financial reporting.

It is governed by a volunteer board of directors who, together with the trustees of the Oregon Symphony Foundation, last year contributed thousands of hours and almost $1.5 million in support of the organization.
The Oregon Symphony performs nearly 80 concerts a year at the Arlene Schnitzer Concert Hall in Portland, in a wide range of music to suit many tastes and preferences. It presents two end-of-summer outdoor concerts in Portland and travels regularly for performances in Salem, Newberg and smaller communities elsewhere in the state. It also provides an award-winning program of educational and community engagement activities.

The Oregon Symphony’s programs serve more than 225,000 people annually. It is supported by thousands of individuals, businesses and foundations and receives funding from the Regional Arts & Cultural Council, the State of Oregon Arts Commission, and the National Endowment for the Arts. The Symphony’s principal volunteer organization, Friends of the Oregon Symphony, supplies valuable volunteer assistance and fundraising revenue.

Now in its 120th season, the Oregon Symphony is the oldest orchestra west of the Mississippi.