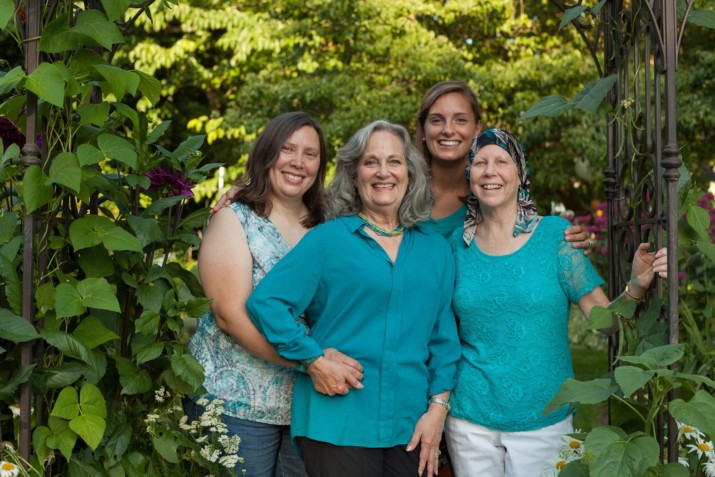 Portland, OR. The goal of “National Wear Teal Day” on Friday, September 7th is to raise awareness for ovarian cancer and its symptoms.

Here are symptoms of ovarian cancer:

There’s a local organization supporting women and their families dealing with ovarian cancer, it’s the Ovarian Cancer Alliance of Oregon and SW Washington. Its big fundraiser is coming up – a night of levity which features a silent auction, a paddle raise and comedy. The 6th annual O-Vary Funny is on FRIDAY (new this year!) October 5th, 2018. Tickets on sale, now. Ovarian cancer awareness supporters werar teal as they fill the audience of a taping of AM Northwest. There are many compelling stories about women who advocated for their own health and didn’t stop until they were properly diagnosed. One was written by Yadira Galindo from the University of San Diego about Jo-Anne Lesser.

For seven months, Lesser saw multiple physicians in an attempt to treat pain, constipation and bloating. They were treating her for suspected gastrointestinal problems with laxatives and dietary changes. The medications and prunes helped only mildly but not long term. “I continued to be incredibly uncomfortable,” recalls Lesser. “I couldn’t even pass enough to fill a stool sample vial. ”When symptoms did not improve, Lesser requested an ultrasound to rule out an abdominal aortic aneurysm — when an area of the aorta bulges and risks rupturing — which runs in her family. The ultrasound found no aneurysm but it did reveal findings suggestive of advanced stage ovarian cancer. One of her ovaries was the size of a grapefruit prompting additional imaging, which showed evidence that the cancer had metastasized — or spread — to nearby lymph nodes and her liver. “I should not have been so polite. I should have insisted on tests earlier,” said Lesser. “Thank goodness my mom had an abdominal aortic aneurysm or I would not have been diagnosed.” Ovarian cancer has been termed the silent killer because its presenting symptoms are often mistaken for other benign conditions, particularly the ones that affect the gastrointestinal system, or simply changes in a woman’s body as she ages. Previous studies, however, have shown that ovarian cancer does present symptoms, even in early stages. In addition to the signs Lesser experienced, persistent urinary urgency, pelvic pressure, pelvic pain and early feelings of fullness when eating could all be indications of this cancer.

“Jo-Anne’s symptoms are commonly seen in patients with ovarian cancer, but these are unfortunately considered nonspecific, so they are frequently ignored or attributed to other age-related problems, like constipation, irritable bowel or indigestion, resulting in delayed diagnosis,” said Ramez Eskander, MD, a board-certified gynecologic oncologist who is now treating Lesser. “It is important to educate patients so that they are aware that ovarian cancer is not a silent disease. If patients develop new and persistent symptoms similar to those discussed, they should be evaluated by their physicians and cancer should be considered as a possible cause.” Unfortunately, due to the lack of an effective screening strategy, ovarian cancer is often diagnosed at an advanced stage. Only 20 percent of ovarian cancers are found at an early stage. However, if found early a woman has a 92 percent chance of a five-year survival. “One of the principle issues is that ovarian cancer is not considered as a possible reason for these symptoms,” said Eskander. “This results in a significant delay from the onset of symptoms to diagnosis. Even with early stage disease, 89 percent of women complain of symptoms prior to diagnosis. If we educate families and physicians, we may be able to identify this disease earlier facilitating intervention and treatment.” Approximately 1.3 percent of women will be diagnosed with ovarian cancer in their lifetime. Compared to breast cancer, which affects 12.4 percent of women, that’s not a big number. But according to the National Cancer Institute, the five-year survival rate of women with ovarian cancer is 45.6 percent compared to 89.7 percent for women with a breast malignancy.