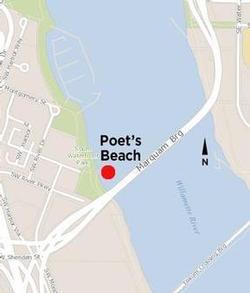 Portland, July 27th, 2014. The Big Float 4 took over the Willamette River in downtown Portland. The goal was to encourage people to “get into the river” and support its preservation and healthy development as a recreational resource. People also had a whale of a good time in the process. Floaters gathered at Tom McCall Bowl then carried their flotation devices and march south along Waterfront Park to the put-in point at “Poet’s Beach” beneath the Marquam Bridge. Floaters paddled down river and landed on the west bank at the Tom McCall Bowl. There they found Portland’s downtown beach party, complete with music barge and live bands, food carts, beer/wine garden, sponsor booths, and a kids’ activities area. (Photo credit,  Point West Credit Union) The Human Access Project is part of the movement to reclaim the Willamette River – to improve access to it, restore its health, and preserve it as a natural resource for generations to come. The Human Access Project was conceived in November 2010, when founder Willie Levenson began organizing an event called “The Big Float.” The Big Float (TBF) is a group innertube float of the Willamette River in downtown Portland, Oregon. The idea behind TBF is that getting a large number of people in the water, in human-powered water vessels of all kinds, would be a powerful way to demonstrate that the Willamette is safe for swimming and human habitation. TBF had its first launch in 2011 with 1,300 participants. 2012 was the second year for TBF, and the event attracted 1,400 participants. The event has continued to grow each year. Money raised from TBF, and from grants and sponsors, has helped HAP take on more projects every year, and get more done. Beyond TBF, the Human Access Project has completed several Willamette River beach clean-up and habitat restoration projects, which are ongoing. One is on the eastside of the river by the Hawthorne Bridge at Audrey McCall Beach. HAP has to date removed 50 yards of concrete during six individual clean up events at this beach. Another project is beach creation effort on the west side of the Willamette.

HAP also hosted a community kickoff event called UnRock the Bowl, where 60 volunteers moved riprap rock from the water’s edge back to the bank where it was initially installed 30 years ago as bank protection. HAP will continue to undertake beach clean-up activities to support its mission.