Portland, September 29th, 2014. Listen, Respond, Repeat was the message at the Willamette Valley Development Officers (or WVDO) Major Gifts Symposium. The symposium was structured around listening to keynote speakers, then moving into facilitated discussions with peer sharing. Organizers say it was a fun day with exhibitors and 501 MentorMatch at the afternoon reception. (photo credit, Andie Petkus) WVDO represents the pinnacle of holistic training and development for our members of the nonprofit community.  Through information sharing, networking, job posting or placing and professional development, WVDO offers members and organizations resources to support and further their commitment to nonprofit causes, services and groups. Portland, July 18th. The annual event is called, “3 Degrees 2 Unite 1 Community.” Organized by Willamette Valley Development Officers, the networking party at Portland’s Lan Su Chinese Garden offered business and nonprofit leaders the chance to create connections. Debbie Rieke from Project Access Now and Bethany Thomas from Ecology in the classroom and outdoors are pictured with Mary Sullivan from Cleantechopen and Lisa Creamer from Emma Inc. mixed and mingled at 3-Degrees. 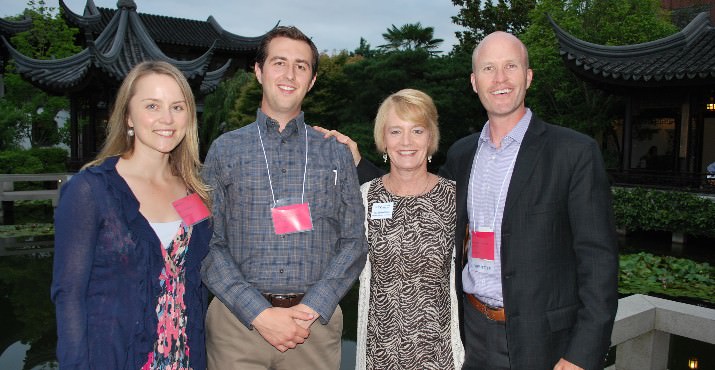 Sara Patinkin from the WVDO Board, Kelsey Pine from “I have a Dream” Oregon, Janet Sams from Candlelighters for Children with Cancer Brennan Wood from the Dougy Center and James Phelps from JKP Fundraising celebrating the conclusion of a great evening with WVDO Exec. Director Agnes Zach.