Portland, OR. The Portland Art Museum announced a landmark gift of $10 million from philanthropist Arlene Schnitzer. This represents the largest contribution from an individual donor in the 127-year history of the institution.

The gift was announced at the Museum by her son, Jordan Schnitzer. Gov. Kate Brown spoke of Mrs. Schnitzer’s extraordinary leadership to approximately 200 invitees, underscoring the importance of investing in the arts in our state. Jordan and Arlene Schnitzer in 2015 at the PNCA Grand Opening

U.S. Rep. Suzanne Bonamici also announced a $750,000 grant from the National Endowment for the Humanities in support of the Museum’s Connections Campaign. Through that campaign, the Museum will transform its campus by connecting its two buildings via the new Mark Rothko Pavilion and by growing its endowment in support of access, exhibitions, and programs.

The Schnitzer gift now represents the lead gift in the Museum’s ongoing Connection Campaign, which is currently in the quiet phase. An official announcement of the public campaign is anticipated in 2021.

“This extraordinary gift is a profound investment in our role as Portland’s museum for art and film, but also in the future of the arts in our region,” said Brian Ferriso, Director and Chief Curator of the Museum. “We are so grateful to the Schnitzer family for their leadership in continually reinforcing that the arts are essential for vibrant, equitable communities. This gift, and the gifts it will inspire, will shape the future of the arts in this community in ways we cannot foresee today.”

The Portland Art Museum released the video below to thank Arlene Schnitzer:

Arlene Schnitzer’s relationship with the Portland Art Museum began when she enrolled as a student at the Museum Art School. 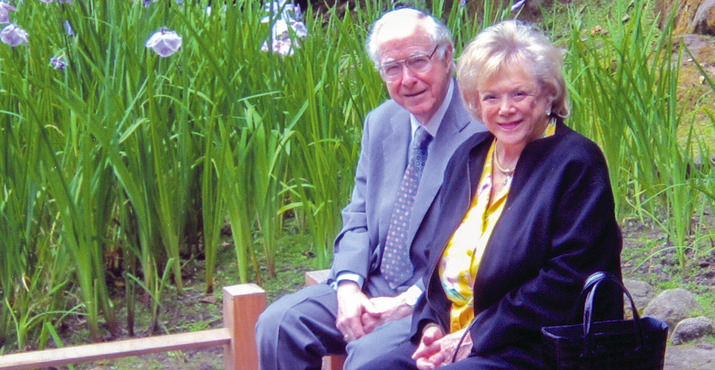 Their passion for art, and our city, led to leadership roles at the Museum. The Schnitzers have provided financial support of important acquisitions, exhibitions, and capital campaigns; donated their Chinese Han Dynasty collection and other works to the Museum’s collection; and made significant investments in furthering the scholarship of the curatorial team through endowments of Northwest and Asian art, whose curatorial positions are named in their honor. The Schnitzers’ vision and generosity led to the creation of the Museum’s Arlene and Harold Schnitzer Center for Northwest Art, celebrating the creative vitality of the region.

When asked about what drives her philanthropy, Mrs. Schnitzer said, “Enough is never enough giving back. And Harold felt it as strongly as I do. And that’s it.”

In recognition of their commitment and contributions, in 2007 Harold and Arlene Schnitzer were named the first-ever Life Trustees of the Museum. In 2014, the Museum showcased Arlene and Harold’s distinguished collection with the exhibition and publication In Passionate Pursuit: The Harold and Arlene Schnitzer Collection and Legacy. That exhibition displayed artwork by many of the Northwest artists whose careers Mrs. Schnitzer nurtured through her Fountain Gallery, including Robert Colescott, the focus of the special exhibition Art and Race Matters: The Career of Robert Colescott, opening February 15 at the Museum. The Schnitzers’ legacy and impact on the arts in Portland and throughout the Northwest are undeniable.

“It has been very exciting to see the Museum change and grow, and to watch interest in the art of the Northwest region blossom,” Mrs. Schnitzer said. “It’s what Harold and I envisioned.”

“I am so proud of my mother, Arlene, and my late father, Harold,” said Jordan Schnitzer. “My mother recently said the reason they have given to the art museum was ‘You either put up, or shut up!’ It doesn’t get any more succinct than that!

“While their financial contributions have been important, I believe their leadership and lifelong effort to enlist many others to support the arts is their greatest legacy,” Mr. Schnitzer continued. “My late father often said, ‘You can’t have too many yellow school buses in front of the Museum!’”

The Portland Art Museum strives to be an inclusive institution that facilitates respectful dialogue, debate, and the free exchange of ideas.  With a deep commitment to artists – past and present – and freedom of expression, the Museum and Northwest Film Center’s collections, programs and staff aspire to reveal the beauty and complexities of the world, and create a deeper understanding of our shared humanity.  We are a Museum for all, inviting everyone to connect with art through their own experiences, voices, and personal journeys.  The following core values guide the Portland Art Museum:

Creativity
The arts are at the core of our humanity, representing a timeless human impulse.

Connection
The arts touch us and connect us across time, geography, and cultural differences, shedding light on how humans interact with their world.

Learning
The arts open us to diverse ideas and ways of knowing ourselves, our community, and our world.

Accessibility
The arts must be economically, intellectually, and physically accessible to everyone.

Accountability
Transparency and careful stewardship of resources—including collections, staff, facilities, and investments – are essential for mission fulfillment now and in the future.