Portland, July 8th.  Waterfront Blues Festival organizers are celebrating 25 years of musical fundraising to the tune of more than 7 million dollars since 1987. Supporters from Safewayincluded Mona Person, Ron Person, Syd Hanigan, a board member, and Cheryl and Bob Helleman. According to Oregon Food Bank officials, this year alone, supporters donated over $902,000 to feed hungry people in our area. “We set a gigantic goal this year and came within inches of meeting it,” said Laura Golino de Lovato, OFB’s director of development. “We’re pleased with the results and thank the entire community for generously supporting the work of Oregon Food Bank.” Syd Hanigan enjoys the sponsor’s tent with the main organizer of the event, Laura Golino de Lovato. Laura is the Director of Development for the Oregon Food Bank. Annie Herbet, Director of Communications, and Jean Kempe-Ware, Public Relations Manager, smile together near the entrance of the event where 116,584  pounds of food was collected. Lucinda Tate, who is on the Oregon Food Bank Board of Directors, Jim Wadsworth, and Janeen Wadsworth, the CEO/Chief Operating Officer smile and enjoy the omelets in the Sponsor’s Tent.

2,300 enthusiastic volunteers and generous blues fans helped make the 2012 Safeway Waterfront Blues Festival, presented by First Tech Credit Union, a rousing success. Festival attendees contributed $902,000 through donations at the gate as well as advance purchases of special passes and DME blues cruise tickets, just shy of the festival’s goal of $945,000. In addition, the festival raised an estimated 116,504 pounds of food, exceeding its goal of 100,000 pounds. This view from inside the sponsor’s tent shows many of the generous donors who help make this event successful. These special guest also enjoyed a deluxe omelet bar for brunch! Gary Houston gets together with Jean Kempe-Ware for a picture. Gary has been designing the art work for the event since 2001. Guests enjoyed four different stages. The Steve Miller Band was one of the headliners. Guests of all ages moved to the music! Lake Oswego, June 24th. The Lakewood Center for the Arts earned high praise from supporters enjoying the creative endeavors of  artists like Brandis Sarich who is pictured with her husband, Kevin Sarich.  The Lake Oswego Festival of the Arts attracted an estimated 25,000 visitors during its three day run. The Festival included several art exhibits, food booths, entertainment, a Craft Faire and featured a special juried and invitational show of photography. 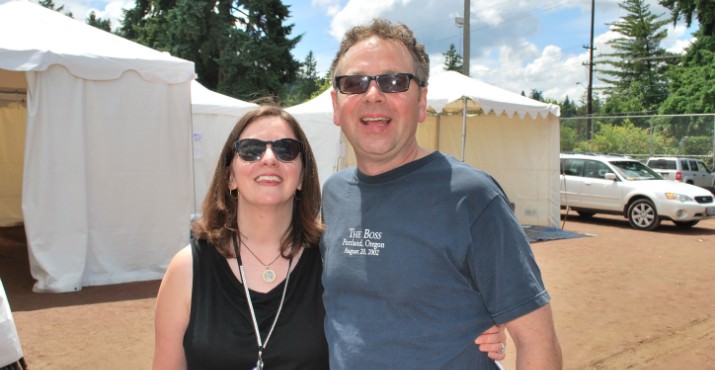 Lake Oswego Festival of the Arts 2012 Bill Warner and Ashley Wase from the Lakewood Theatre Company