Portland, OR. Chanukah begins Sat. night, Dec. 24, 2016 and continues through Sunday, Jan. 1, 2017. Chanukkah, the Jewish festival of rededication, also known as the festival of lights, is an eight-day festival beginning on the 25th day of the Jewish month of Kislev. It is celebrated with a nightly menorah lighting, special prayers and foods. The Jewish Federation of Greater Portland has a full schedule of activities to celebrate Chanukah. What better way to celebrate the first night of Chanukah than by throwing a community-wide dance party!

CHANUKAH PARTY WITH SPECIAL GUESTS: MICHELLE ALANY AND THE MYSTICS

P’nai Or of Portland: Jewish Renewal
9750 SW Terwilliger
Portland, OR

Come one, come all and join us for the CNS annual Chanukah party. There will be a fish/dairy dinner with latkes,…

The Ultimate Dreidel Smackdown makes a return, with other games and activities to chat over!

Celebrate Chanukah with us and enjoy games, music, dreidel, latkes and more!

CHANUKAH CELEBRATION FOR ALL AGES

Bring dreidels, chanukiot and candles, if you have them. We’ll fill the night with light, warmth and laughter!

CHANUKAH WITH A NEW YEAR’S TWIST

Share in the miracle and magic of Chanukah with a New Year’s Twist! Celebrate at Shaarie Torah for an evening of…

COMING TOGETHER IN DARK TIMES 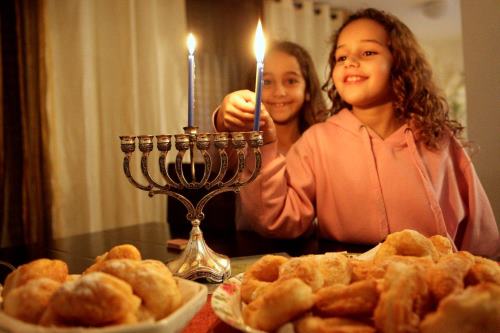 Chanukah is the Jewish eight-day, wintertime “festival of lights,” celebrated with a nightly menorah lighting, special prayers and fried foods.

The Hebrew word Chanukah means “dedication,” and is thus named because it celebrates the rededication of the Holy Temple (as you’ll read below). Also spelled Hanukkah (or variations of that spelling), the Hebrew word is actually pronounced with a guttural, “kh” sound, kha-nu-kah, not tcha-new-kah. 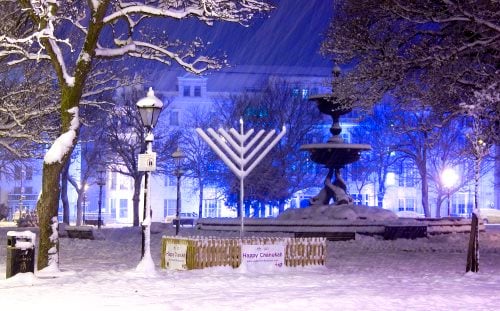 Artist Dominic Alves captured this image of a snowy Chanukah in Brighton, UK.

In the second century BCE, the Holy Land was ruled by the Seleucids (Syrian-Greeks), who tried to force the people of Israel to accept Greek culture and beliefs instead of mitzvah observance and belief in G‑d. Against all odds, a small band of faithful Jews, led by Judah the Maccabee, defeated one of the mightiest armies on earth, drove the Greeks from the land, reclaimed the Holy Temple in Jerusalem and rededicated it to the service of G‑d.

When they sought to light the Temple’s Menorah (the seven-branched candelabrum), they found only a single cruse of olive oil that had escaped contamination by the Greeks. Miraculously, they lit the menorah and the one-day supply of oil lasted for eight days, until new oil could be prepared under conditions of ritual purity.

To commemorate and publicize these miracles, the sages instituted the festival of Chanukah.