Portland, February 6th, 2016. Building facades were glowing with animated projections, light was dancing off the Willamette River near OMSI during the inaugural Portland Winter Light Festival. The festival, organized by the nonprofit Willamette Light Brigade, attracted premier artists who brought excitement to the city during a time of year when it is often quiet. 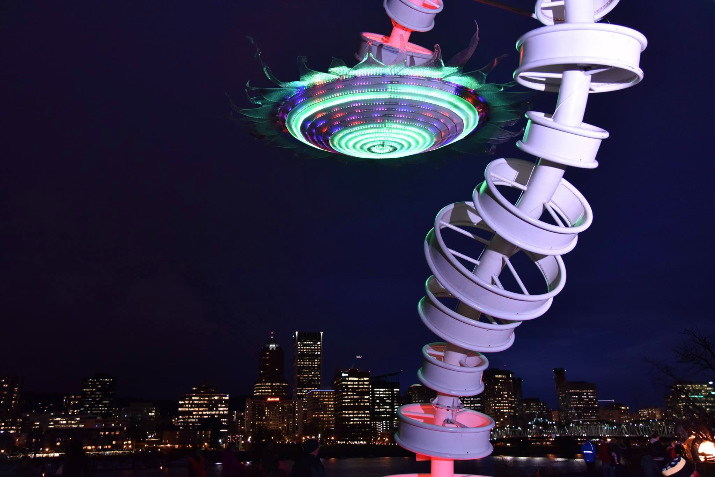 Helianthus Enormae – The giant luminous sunflower from PhotonicBliss on Vimeo. Hosted by OMSI, no tickets were needed for this event on the East Bank of the Willammette River. There were many associated events. Clever Cycles had a one-of-a-kind bike parade with battery-powered lights. For a different view, some took a free ride on the Portland Spirit right to the festival’s hub. The free event showcased light art and performance from Northwest artists as a series of light-based installations, projections, performances and activities that expand the boundaries of art and technology.

The Portland Winter Light Festival is partnered with 14 Affiliate Events, featuring an array of artists, performers, and interactive experiences during the four nights of the festival.

The Portland Winter Light Festival (PWLF) is an event of the Willamette Light Brigade, a non-profit organization. The PWLF is a free, community-wide, annual winter arts attraction and cultural event that will transform, illuminate and animate Portland’s nighttime urban landscape each February. It’s focus is a series of light-based installations, projections, performances and activities that expand the boundaries of art and technology.

We gratefully accept donations year round to help the Portland Winter Light Festival grow. Your individual donation is tax deductible as the Willamette Light Brigade (WLB) is a 501(c)(3) non-profit