Portland, December 15th, 2015. Holiday shoppers had reason to smile when they spotted some of their hometown favorites ringing a bell for the Salvation Army. KOIN’s Jenny Hansson had help from Jenna Cooper and a favorite TV news anchor team from the past: Shirley Hancock and Mike Donahue. It was all part of CEO and Celebrity Bell Ringing Day to benefit local needy families. In just two hours volunteers raised $2,000 dollars for the nonprofit. Coperate sponsors are a big part of the success, including Skyline Home Loans. “We’re so proud to partner with Skyline Home Loans NW, a company in our community that’s committed to our own motto of ‘doing the most good’ for anyone in need,” said Major Nancy Dihle of The Salvation Army’s Portland Metro Division. 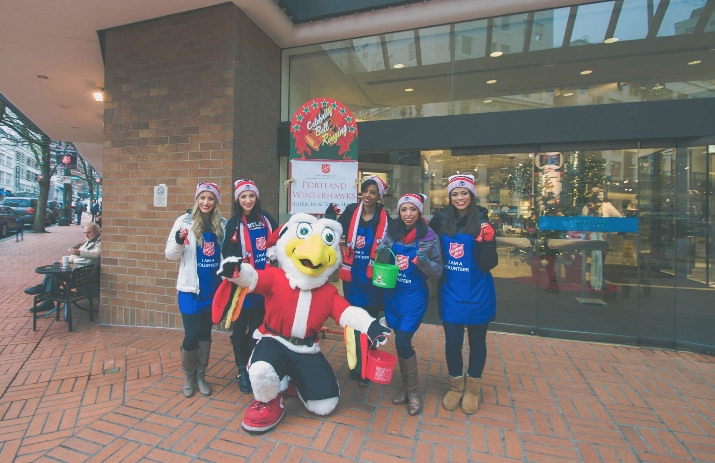 The Portland Winterhawks Rosebuds Dance Team and Tom-A-Hawk were part of the crew out ringing the bells. Danny Bruno, ‘Bud’ from Grimm and Cadet Laura Fyn from The Salvation Army Portland Tabernacle joined with Commissioner Amanda Fritz for the event. This year was the largest Celebrity Bell Ringing Crew – with over 30 participants around Pioneer Square.

According to leaders of the nonprofit, the most beautiful phrase most bell ringingers hear consistently as someone drops a few coins in the kettle is, “The Salvation Army saved my life.”

Through Dec. 21st, Skyline Home Loans NW will host a Salvation Army Angel Tree, Red Kettle and Team Toy Drive for donations in four of their offices to collect toys for children in need.

From the Salvation Army:

“Doing the Most Good.”  This slogan commonly used in conjunction with The Salvation Army originated from a quote made by Evangeline Booth, daughter of William Booth, the founder of The Salvation Army.  She said:

“There is no reward equal to that of doing the most good to the most people in the most need.”

Today, this idea continues to ring true for The Salvation Army through its slogan “Doing the Most Good” as well as its work in Portland, Ore.

Since 1886, The Salvation Army in Portland has been dedicated to doing the most good in any way possible.  With 4 worship and family service centers, also known as corps, and 6 specialized programs throughout Clackamas, Multnomah, and Washington Counties, good is being done to those in the most need.

In 2011, Major Don Gilger was appointed as the Portland-Metro Coordinator.  One of his goals is to partner with these communities to promote and motivate support within and outside of The Salvation Army.

The Portland-Metro corps and programs are a part of The Salvation Army Cascade Division, which serves all of Oregon and Southern Idaho and is headquartered in Happy Valley, Ore.