Portland, November 14, 2015. Celebrity guest star William Shatner entertained and inspired a crowd of 550 attendees at the Jewish Federation of Greater Portland’s gala event: A Benefit for the Future. Michael Weiner, Gala Co-chair, William Shatner, and Kathy Davis-Weiner, Gala Co-chair ensured all had a memorable experience. Supporters who flocked to this sold out event were transported to a futuristic setting which was created inside the Mittleman Jewish Community Center. (Photo Credit, One Click Studio PDX and LeeAnn Gauthier.) Lauren Shleifer Goldstein, 2015-2016 Campaign Chair explains that the support of Federation sends the message to “our children and grandchildren that we’re going to do our all to give them the tools they need in order to be resilient and adaptable to the unimaginable changes ahead of them, as we have been thanks to those who came before us.” Sen. Ron Wyden, proud longstanding donor to the Jewish Federation, noting “the values of tzedakah (charity) and acts of loving kindness are pervasive in this room. 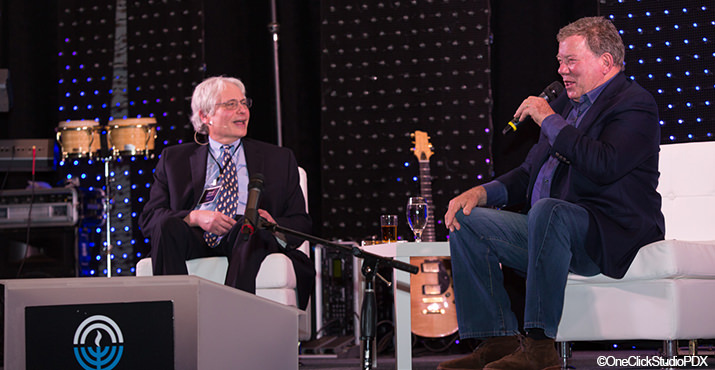 After the main event, guests danced through the night with feel-good tunes from local band, Pressure Point. Isaac Brynjegard-Bialik and family present his mixed media piece, “To Boldly Go” to William Shatner. The artwork is made of strips of Star Trek comics.

Mr. Shatner’s appearance with the Jewish Federation of Greater Portland marked his first Jewish community formal address since his bar mitzvah over 70 years ago. Mr. Shatner spoke from the heart describing the act of giving as the most profound impact someone could have on the world. Oregonian columnist David Sarasohn pitched insightful questions that ranged from life as a Jewish summer camp counselor for young Holocaust survivors to secrets of keeping active at age 84 (late night horse cart racing is key!).

In all, gala attendees have committed over $1 million towards the Jewish Federation’s Annual Campaign. The Jewish Federation’s Annual Campaign educates youth, ensures a Jewish future, feeds the hungry, cares for the elderly, and bridges cultural divides. As Mr. Shatner remarked, the actions of our community on this night truly ripple around the globe.

From the The Jewish Federation of Greater Portland:

The Jewish Federation of Greater Portland is grateful for the generous support of our sponsors: Leon and Esther Feldstein Fund of the Oregon Community Foundation, Gevurtz Menashe Attorneys at Law, Harold and Lorraine Kropitzer Endowment Fund, Babcock & Jenkins, KeyBank, Stoll Berne, and the amazing support of our community donors.

Since 1920, the Jewish Federation of Greater Portland has been your means of connecting with your community, discovering new ways to do good and giving back to those who came before you. By raising funds that support a broad network of organizations and through innovative programming and initiatives, we are able to meet the ongoing needs of people at home, in Israel and around the world for today and for future generations. Learn more at www.jewishportland.org