The party was a great excuse to bring out anything orange! All rides on TriMet buses, MAX trains, Portland Streetcar and the Portland Aerial Tram were free all day.

The grand opening celebration was a two day affair which drew tens of thousands of people who wanted to celebrate the first new bridge to cross the Willamette in over 40 years. The First Light show, which ran just under 10 minutes, was synchronized with a special All Classical Portland soundtrack and showed the bridge brilliantly lit in every color. 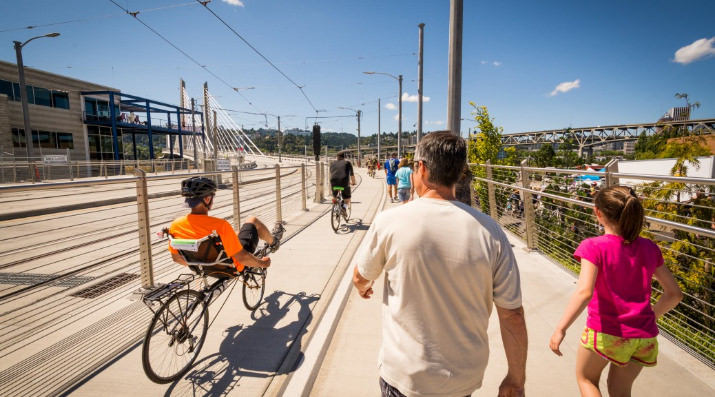 The opening of Tilikum Crossing completes 7.8 miles of bike infrastructure associated with the MAX Orange Line, and introduces new options for thousands of cyclists and pedestrians. “People seem to adore the aesthetics of it, the art, the architectural lighting and how well it fits its site,” says Dan Blocher, TriMet’s executive director of capital projects. “It was a three-year process to embrace the city of bridges [and determine] what bridge type would work here. This fits in the environment.”

Trimet created a video to expain more about the process:

U.S. Rep. Earl Blumenauer, speaking at the opening ceremony, noted that he’s attended every MAX and Portland Streetcar opening. “There’s none that’s been more anticipated nor significant than what we’re celebrating here today,” he said. “The Orange Line, the bridge that ties it all together, this is transportation for our future today.”