Oregon Zoo Has it in Writing: Lily the Elephant is Here to Stay PORTLAND, Ore. February, 8th. In an agreement finalized today, the zoo assumed legal ownership of Rose-Tu’s new calf from Have Trunk Will Travel, the California-based company that had previously held rights to the young elephant.“Lily’s living arrangements were never in question,” said Kim Smith, zoo director. “But this makes it official: Lily will live her life with her family herd, the way elephants should.” 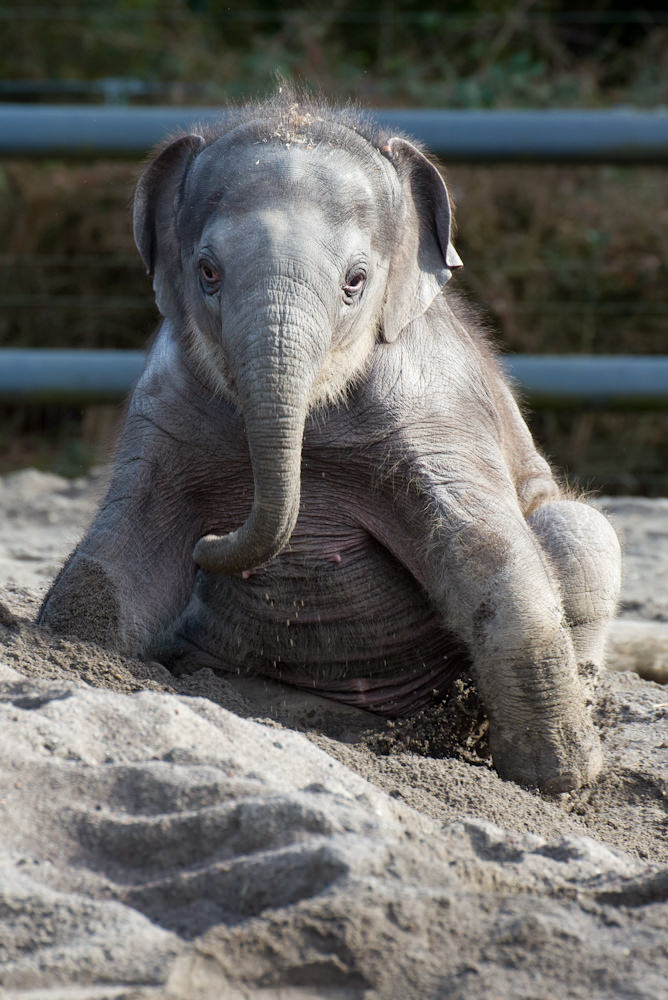 Smith said the zoo also will retain Tusko, the 13,000-pound bull elephant who sired both Lily and Samudra and has been here on a breeding loan since 2005. The zoo arranged to acquire both elephants for $400,000, thus voiding its loan agreement with Have Trunk Will Travel and putting to rest any speculation that Tusko’s future offspring might not belong to the zoo. The purchase was funded entirely by the Oregon Zoo Foundation, the private nonprofit fundraising arm of the zoo, and did not involve public monies.

“We are grateful to the dedicated donors who recognize the zoo as an important community asset and support our work through the Oregon Zoo Foundation,” Smith said. “The ongoing support these gifts provide not only made this ownership transfer possible but helps advance our daily efforts to create a better future for wildlife.”

Lily’s status was secured today with a payment for half the total purchase amount, while the transaction involving Tusko is complete pending a permit from the U.S. Fish and Wildlife Service (a requirement since Tusko was born outside the country).

Smith said she understands the need for reassurance about the fate of Rose-Tu’s calf, as well as the initial public outcry over some misleading reports.

“Given the sensationalized story people were first presented with, that’s exactly how they should have reacted,” Smith said. “If I thought for one minute that this baby was going to be taken from her mother — taken from her home — I would be outraged too. But Lily was never going away, and I think everyone understands that now.”

Controversy first stirred when a Seattle newspaper ran an article suggesting the zoo’s newborn elephant calf could be plucked from her mother and dropped into a traveling circus. As evidence, the paper produced a copy of the 2005 breeding loan for Tusko; the agreement stipulated that Tusko’s second, fourth and sixth offspring would be owned by Have Trunk Will Travel.

The contract, Smith said, was a standard one — and old news to those who’d followed Tusko’s story in The Oregonian. In the zoo world, she noted, ownership is not an indicator of where an animal will live. Even so, the timing of the Seattle article hit a nerve with local residents, who had fallen hard for Rose-Tu’s baby and sought reassurance that she wasn’t going away.

“This controversy was much ado about nothing,” Smith said. “But it’s still been incredibly gratifying to see our community come together like this on behalf of elephants. The passion we’ve seen is precisely what we aim to inspire — it’s what gives me hope for the future, because Asian elephants are facing serious threats to their survival right now.”

Considered highly endangered in their range countries, Asian elephants are threatened by habitat loss, conflict with humans and disease. It is estimated that fewer than 40,000 elephants remain in fragmented populations from India to Borneo.

The Oregon Zoo is recognized worldwide for its successful breeding program for Asian elephants, which has now spanned 50 years. Lily’s grandmother, Me-Tu, was the second elephant born at the zoo (just months after Packy in 1962), and her great-grandmother, Rosy, was the first elephant to live in Oregon.