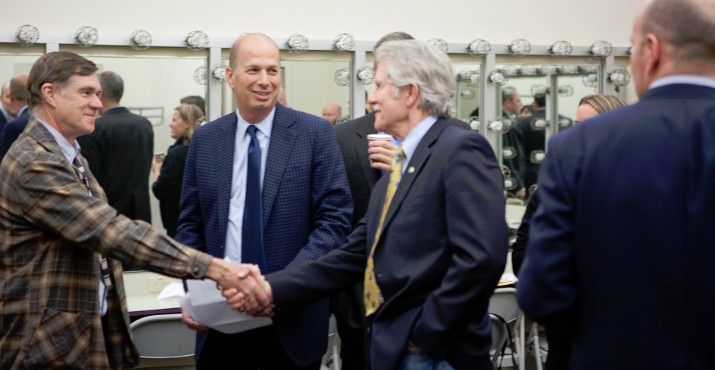 Catherine Comer, (Business & Economic Development Manager) and Jamie Johnk (Economic Development Coordinator) were honored because they represent a “best case” example of the cooperation between the needs of the film and media production industry and the community at large. Often the needs of production temporarily inconvenience the public, but instead of seeing these instances as having a negative impact, Catherine and Jamie see them as opportunities. They understand that to facilitate production is to bring revenue and economic development to their county.

Additionally, organizers explained that storytelling has always been a part of Oregon’s DNA. We have great novelists, great song-writers, and great filmmakers. We also have great innovative storytellers. One such group of innovative storytellers is Second Story Interactive Studios.  Founded in 1994 by Julie Beeler and Brad Johnson, Second Story is thought of as one of the leaders in the interactive industry, collecting over 400 awards and accolades. Derrick Roberson, the Recreation Coordinator for Portland Parks and Recreation, operates as a communication liaison between Location Managers and the Portland Parks and Rec. staff. Sergeant Erin Smith, Traffic Division Motor Sergeant for the Portland Police Bureau, ensures streamlined bookings of officers, motorcycles and cars when film crews need them on set.Sergeant Peter Simpson, Public Information Office for the Portland Police Bureau, helps when productions need PPB permissions or assets, for example whenever “Grimm” needs to use old Portland Police uniforms or the likeness of PPB vehicles for the show. (Pete also does the occasional guest appearance.)

Supporters were told the Oregon Film and TV industry is strong and growing.

Board Member and Screenwriter Cynthia Whitcomb

Here’s a video of the meeting.

Part of the mission of the organization is to lobby for incentive money for filmmakers. The Northwest Economic Research Center at PSU drafted a report about the Economic Impact Analysis for the Oregon Governor’s Office of Film and Television. It found Since 2007, the Portland Metropolitan Area has seen a 24% increase in film and video production jobs.  “While the industry appears to be healthy and growing (especially in Portland Metro), it is important to measure this success against the incentives needed to attract out-of-state productions. In 2011, the total amount used for all incentive programs was $11,824,973. The incentive funds come from the sale of tax credits and the return of some withheld income. The employment returns for the program are strong, but the tax revenue raised through increased activity did not fully fund the program.” Here’s a link:

Projects Currently in Production in Oregon