Portland, February 7th. The vibrant volunteer network, Hands On Greater Portland joined forces with the Portland Trail Blazers to honor some of the city’s most outstanding volunteers. Portland Mayor, Sam Adams, Dana Ingram the wife of top honoree Rob Ingram, and Laurel Porter from KGW were all on hand for the popular event. Over 300 people crowded the ballroom at the Governor Hotel to honor the award recipients. Six special awards were handed out by community leaders. Portland Trail Blazers Team President, Larry Miller told the group how important volunteerism is to the City of Roses. 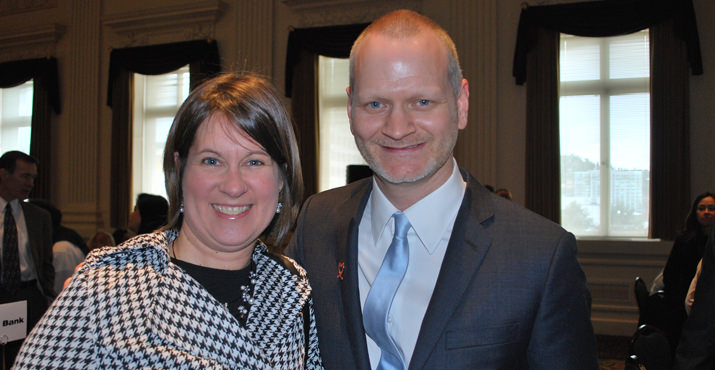 Danielle Swope, the founder of The Children's Book Bank is pictured with Dwight Adkins-- the Hands On Greater Portland Assistant Director who helped organize the event.

The highest award, The Heart of the Community, was given posthumously to Rob Ingram. He was the director of Portland’s Office of Youth Violence Prevention and president of the Urban League of Portland Young Professionals. Rob Ingram died last November; the father of five was 38. His wife Dana accepted the award for her late husband.

Here’s more information on how you can get involved in your community from Hands on Greater Portland:

Get started in your own community. Hands On Greater Portland can help. We will connect you with a volunteer opportunity that makes a meaningful, rewarding change in the Portland area. Build a house. Tutor a child. Care for abandoned pets. Build hiking trails. Lead a volunteer group. Join a nonprofit Board.

Whether you are working, parenting, in school or retired, Hands On Greater Portland offers you a variety of ways to get involved while meeting your schedule and interests. Volunteer for a one-time project. Volunteer for a few weeks. Volunteer after work or on the weekends. Volunteer alone, with family, friends or co-workers.

When you volunteer with Hands On Greater Portland, you join people from all backgrounds and experiences. You get a chance to explore issues that shape our community and develop your leadership and job skills. Get connected. Get more done. Have fun. You might even change the world.

Hands On Greater Portland is a 501(c)3 non-profit organization.