Portland, OR.  Nike and OHSU Doernbecher are putting their annual benefit auction on hold while they vet some bidders. The 17th annual event called Virtually Freestyle was online. At one point, a shoe collector’s site reported the pair shown above was selling for more than $2 million. The auction was quickly stopped and Doernbecher released a statement that explained, “Out of an abundance of caution, the OHSU Foundation proactively halted the bidding process of Thursday’s Virtually Freestyle auction and is actively working to verify the authenticity of uncharacteristically high bids. We took these steps as added measures to existing security protocols.”

Due to the impact of COVID-19 pandemic, instead of a range of shoes designed by children, Nike and Doernbecher settled on the “What The” themed Air Jordan 1. The special shoe was created using elements of Doernbecher Freestyle designs of the past. Unlike past years, this shoe isn’t being prepped for a wide release—instead, a very limited run of 17 pairs was produced. Typically, a group of children ages 8 to 15 are selected to work with Nike designers on a range of footwear that’s eventually released to the public. Doernbecher Freestyle raises money and awareness for the hospital. Over the years, the event has raised more than $29 million for the hospital, including $1,898,525 from the 2019 collection.

The children’s hospital is investigating what happened during a kickoff auction on February 25th when bidding on the first pair hit the $2 million dollar mark. For some perspective, last May Michael Jordan’s game-worn, autographed, Nike Air Jordan 1S from 1985 sold for $560,000 at a Sotheby’s auction. That was a world record price.

Doernbecher officials explained what they plan to do going forward with the following statement:

Doernbecher Freestyle adapted to the COVID-19 pandemic by partnering with a reputable online auction vendor to coordinate Virtually Freestyle, the program’s first event, and auction to take place solely online.

The OHSU Foundation is committed to following best practices and ensuring a fair auction. Event attendees interested in submitting bids for Virtually Freestyle auction items, including a special Air Jordan 1 “What The” Doernbecher, were required to agree to a robust Terms and Conditions contract. Bidders were also required to register using a valid credit card number, as a part of the authentication process completed by the online auction vendor.

To allow us the necessary time to reaffirm the validity and security of this and future online bidding processes, we have postponed the online auction of the sixteen remaining pairs of the Air Jordan 1 “What The” Doernbecher previously scheduled to begin Friday, Feb. 26. We will share additional information regarding the status and availability of Virtually Freestyle auction items at a later date.

Designers call the shoes an unforgettable tribute to former patient-designers, seen through the vault of Air Jordan: an Air Jordan I “What The” Doernbecher, featuring elements from each of the program’s 14 Air Jordan designs.

Below are photos of the specific details of the shoes: 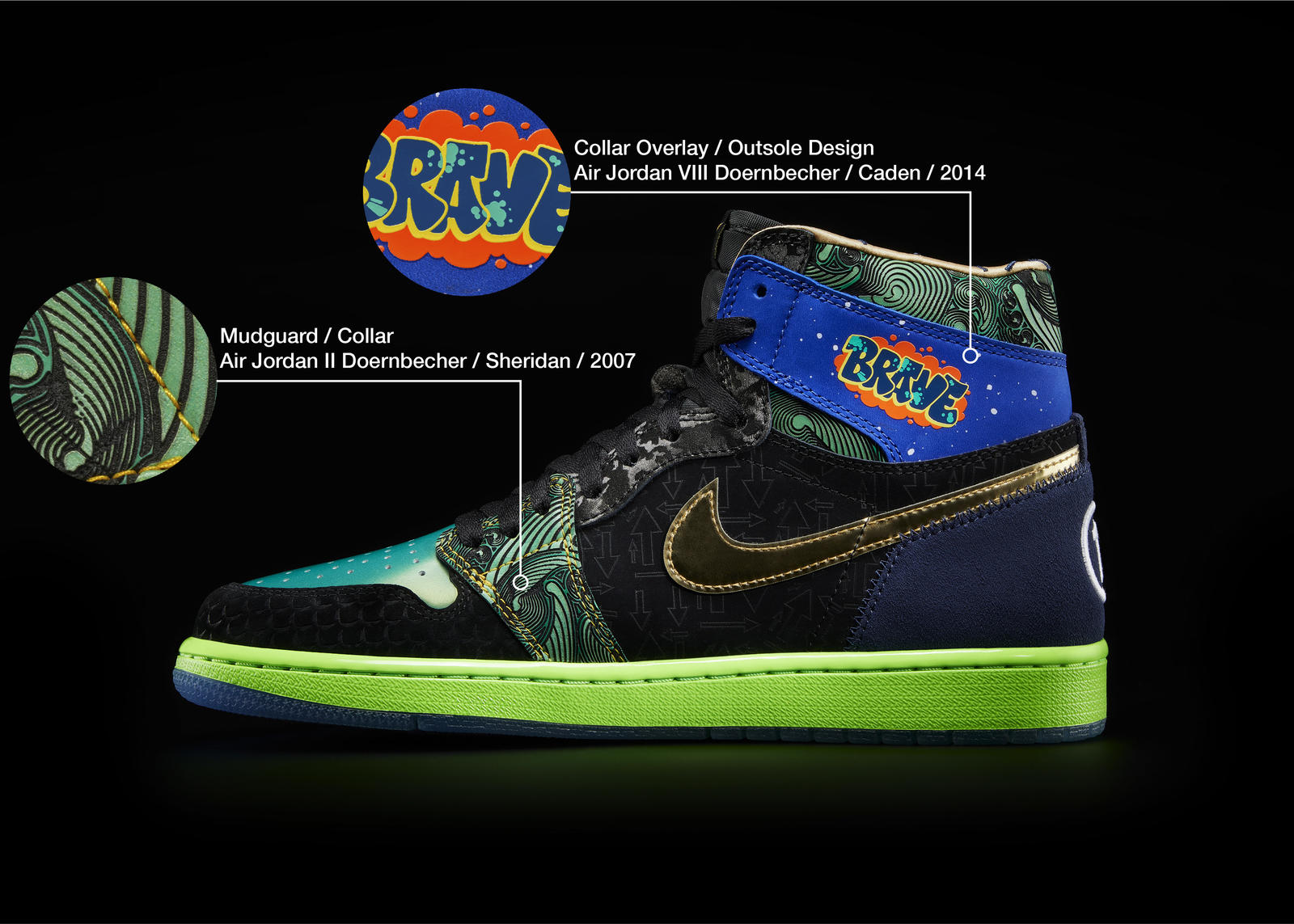 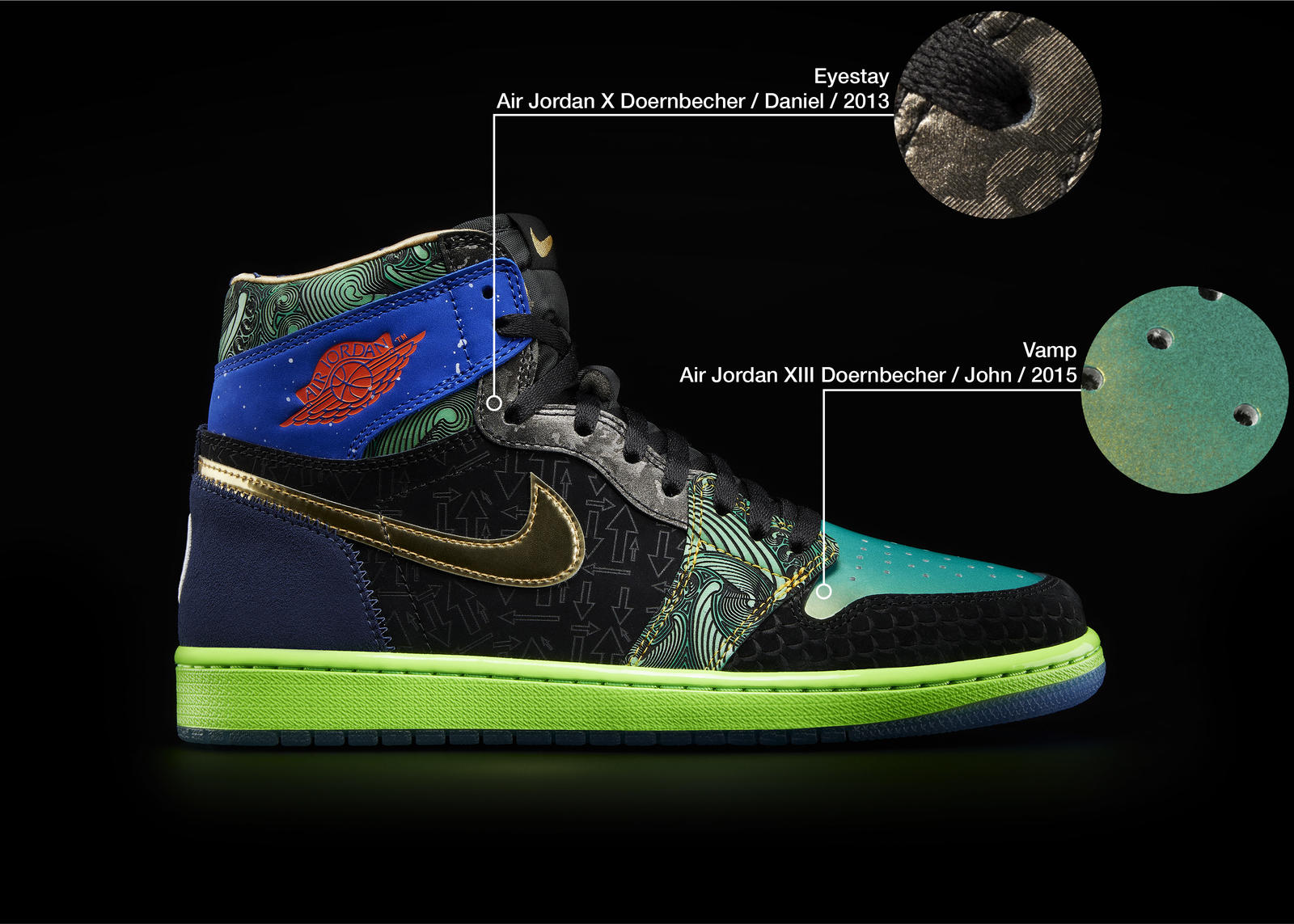 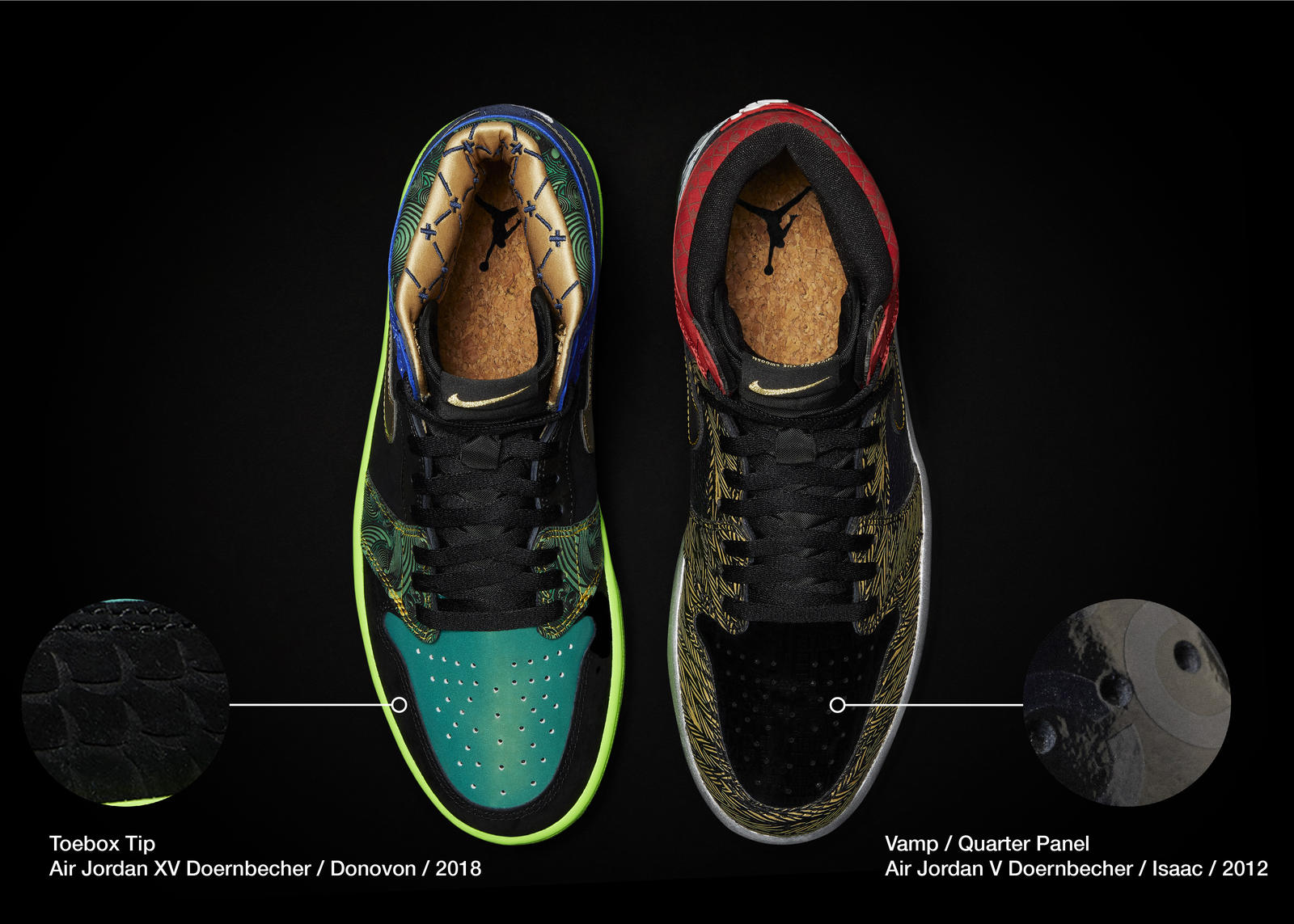 Donovon, Air Jordan XV Doernbecher (2018) A fan of Japanese anime, Donovon wanted his original Air Jordan XV design to represent him as a character in his own anime story. Suede dragon scales covered the shoe’s upper, while bright gold accents represented the hero’s armor. Both elements can be found on the AJ I “What The” Doernbecher’s right tip and shiny Swoosh. / Isaac, Air Jordan V Doernbecher (2012) Isaac’s Air Jordan V officially released on September 14, 2013, on what would have been his 14th birthday. The AJ I “What The” Doernbecher celebrates Isaac’s enduring spirit. The material from Isaac’s original design — which features glow-in-the-dark and black-light-activated elements inspired by his love of video games — is included on the quarter panel of the left AJ I. 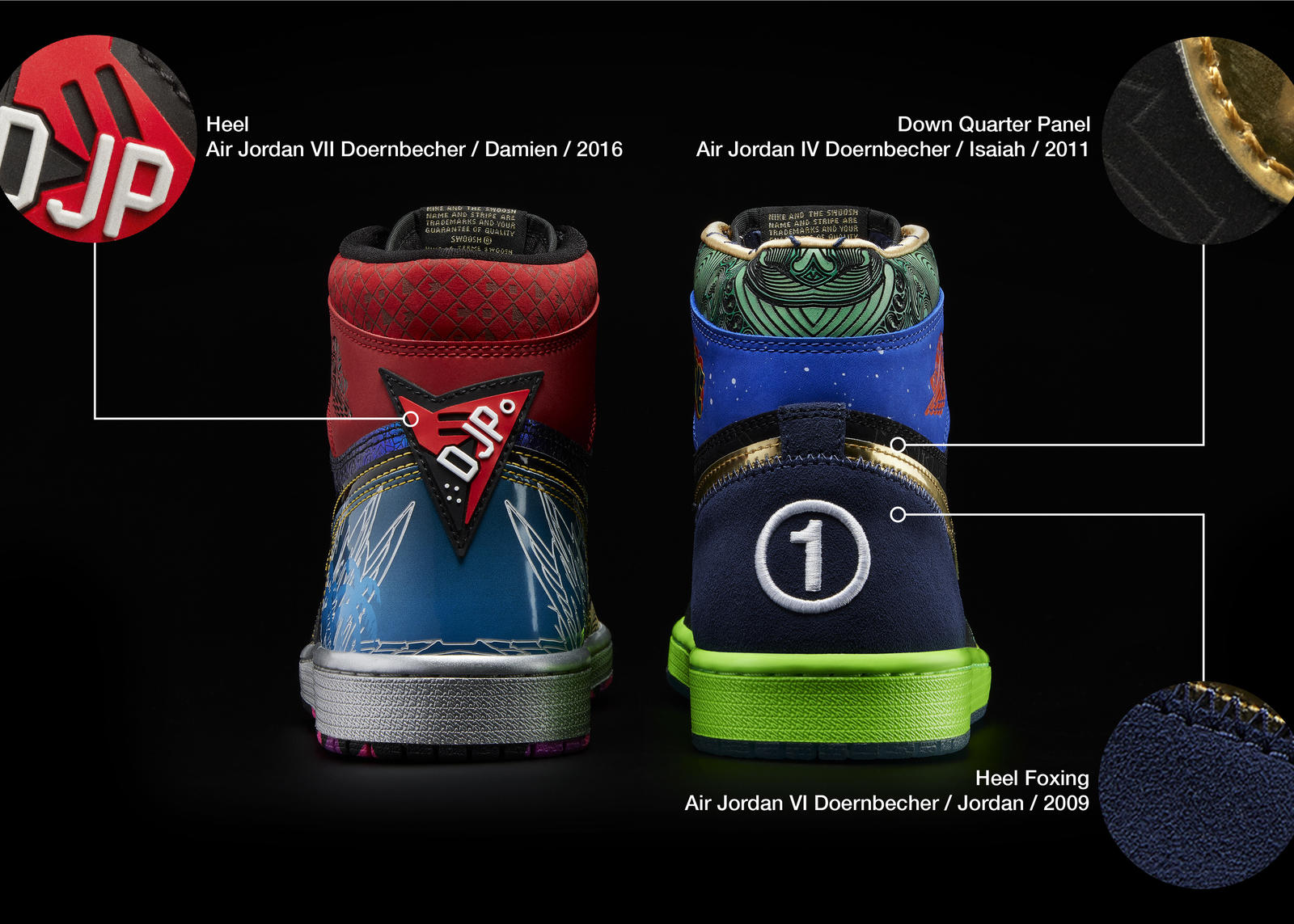 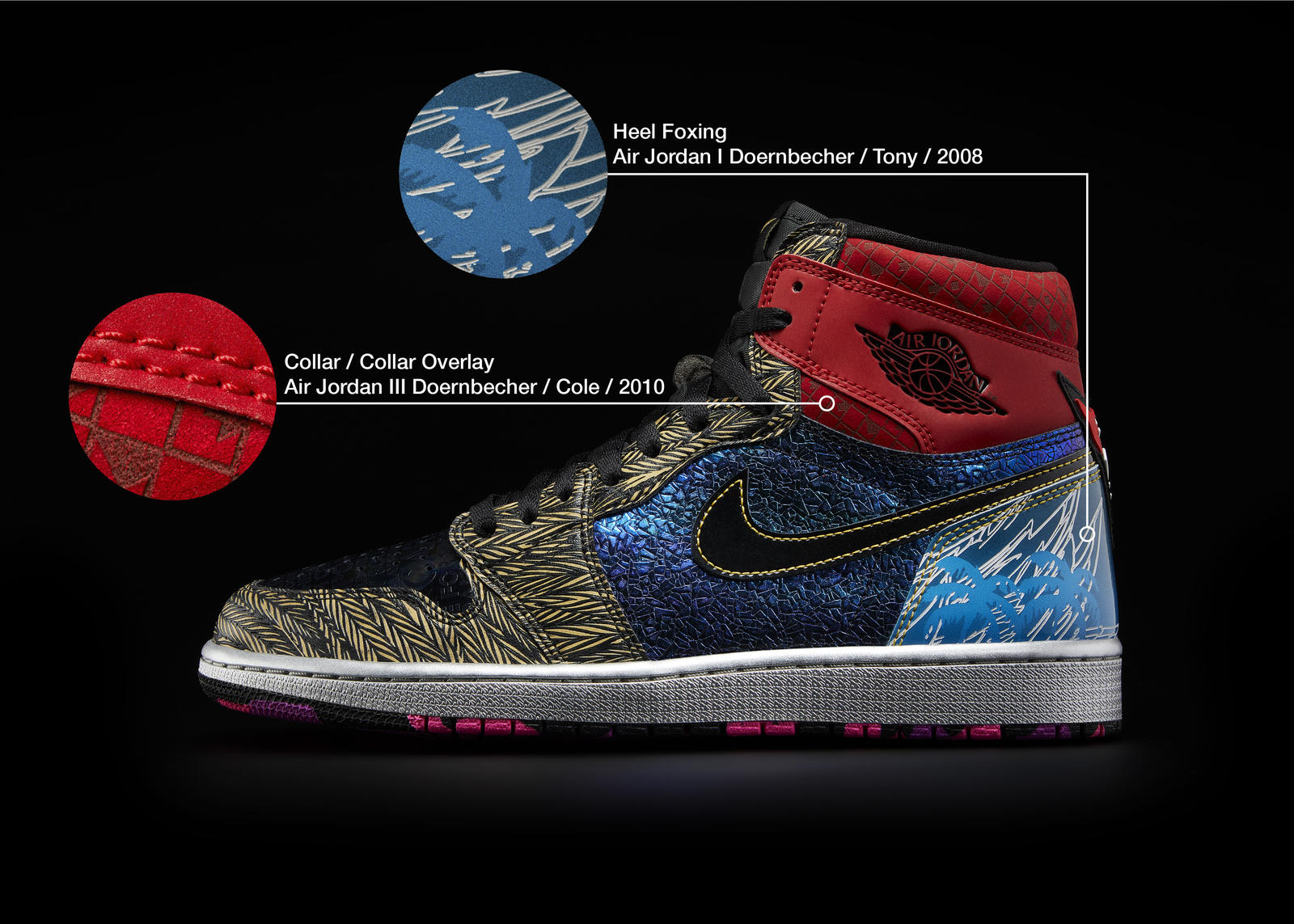 Cole, Air Jordan III Doernbecher (2010) Look closely at this year’s left shoe collar and outsole to find Cole’s favorite design element: a grid pattern which spells “C-O-L-E” in repetition. / Tony, Air Jordan I Doernbecher (2008) Tony’s original palm trees represent his favorite tropical place, while the angel wing pattern symbolizes everyone, including his family and the Doernbecher team, who supported him during his medical journey. These same angel wings are present on the heel foxing of the left AJ1 “What The” Doernbecher, and his bright yellow contrast stitching on the Swoosh represents the good times cutting through the bad. 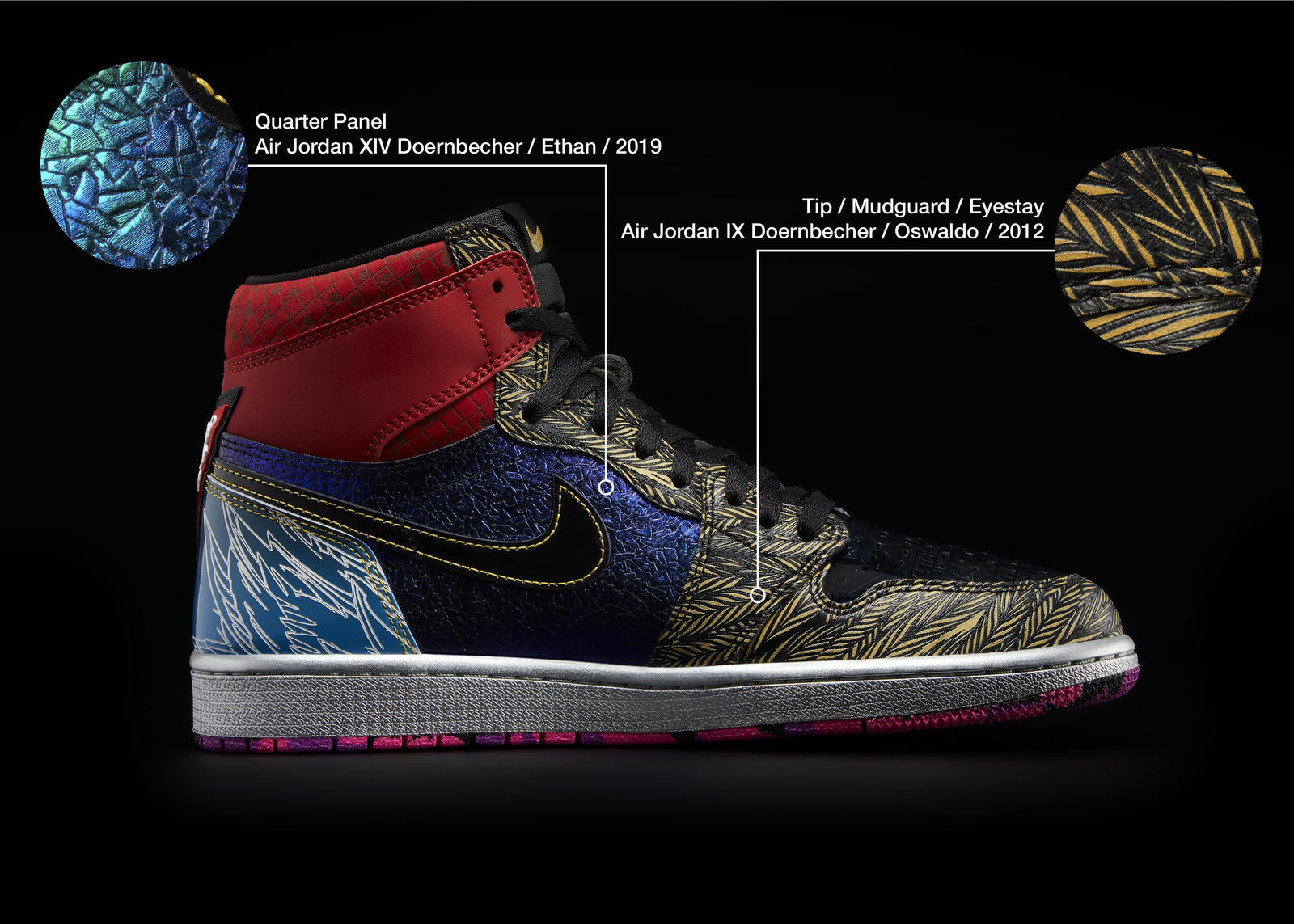 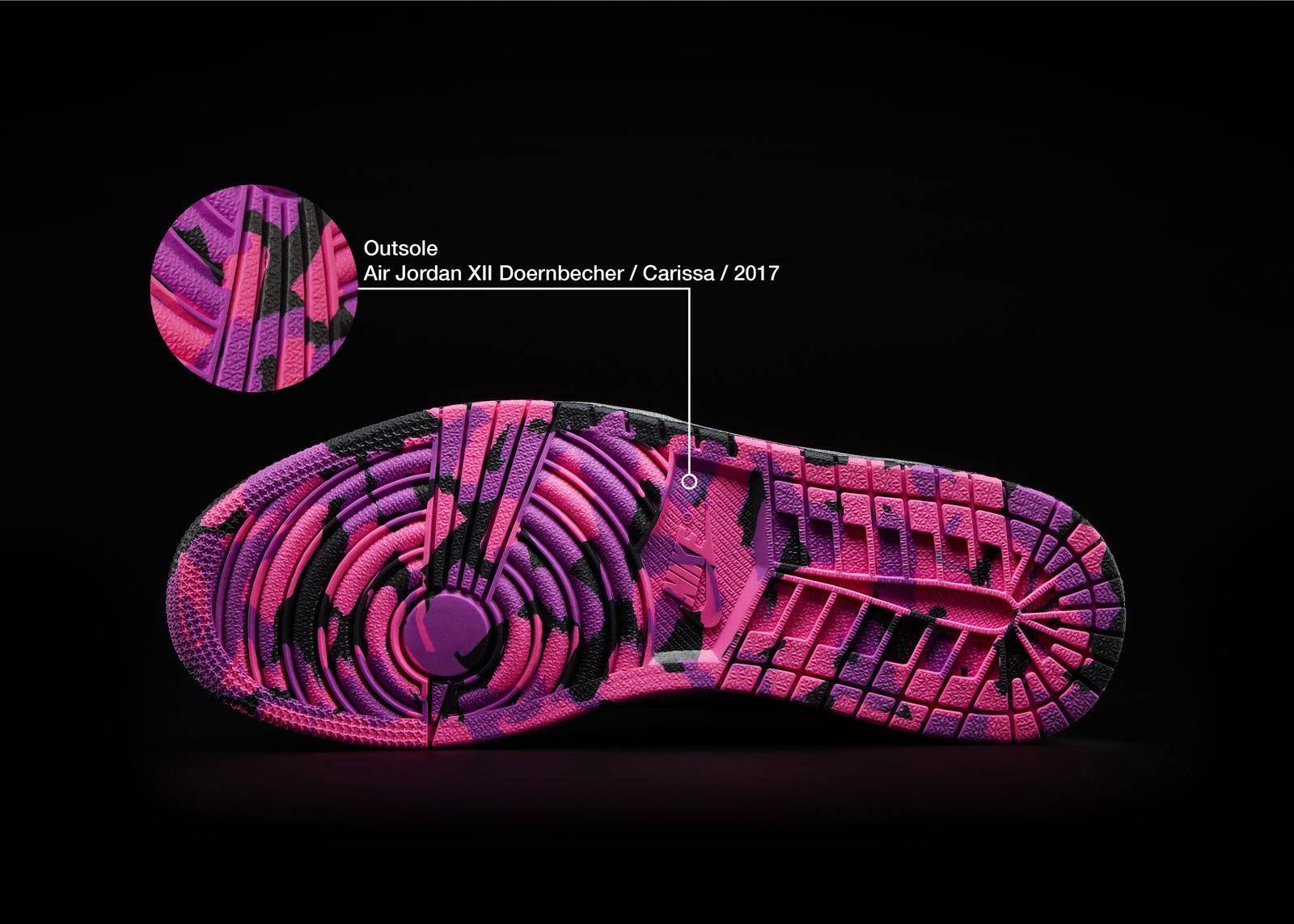 Carissa, Air Jordan XII Doernbecher (2017) Carissa’s Air Jordan XII design was all spunk, loaded with references to food, pets and colors. That energy is reflected in her design’s wild, marbled pink outsole, which appears on the left outsole of the AJ I “What The” Doernbecher.