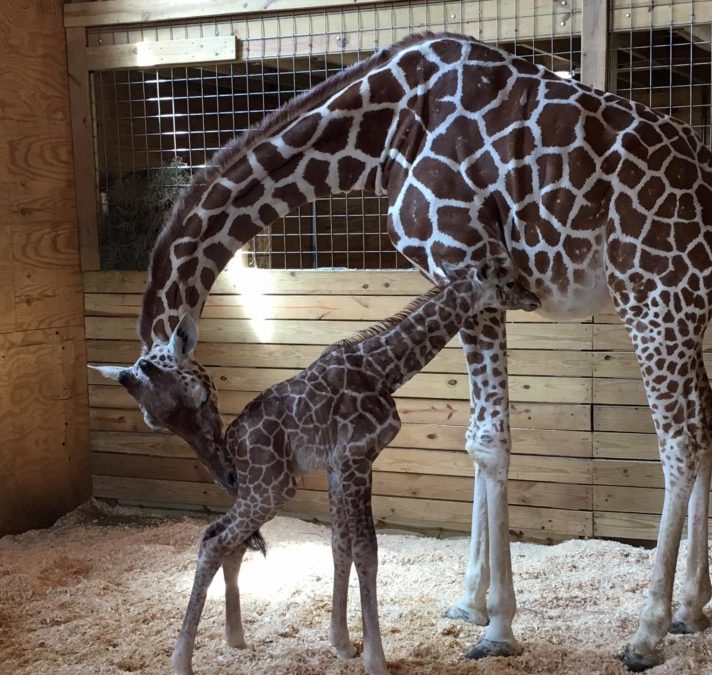 April the giraffe, who became an Internet sensation, finally gave birth to a male calf on Saturday. The publicity and notoriety brought with it generous donations to Animal Adventure Park in upstate New York. The facility that houses April is an interactive educational animal park, designed to promote up close and hands-on animal encounters. Administrators there have pledged to share their new support for giraffes with the Giraffe Conservation Foundation (GCF), which works to protect giraffes in the wild. Part of the money raised is from the “live cam” sponsored by Toys are Us. Millions of people around the world are still watching April and her calf live on this YouTube channel:

There will be a contest to name the calf, and April will begin to raise it, weaning it for six to 10 months, according to the park. Eventually, the baby giraffe, April’s fourth, will be moved to away to a separate facility. The father, Oliver, is not expected to be in the picture much. The Animal Adventure Park has been closed for the season and will reopen on May 13th. In the meantime, the park wants to educate people about giraffes and support the work of the Giraffe Conservation Foundation, sharing it’s story and information and messages. In the meantime, the park wants to educate people about giraffes and support the work of the Giraffe Conservation Foundation, sharing its story and information and messages.

Giraffe numbers have declined by ~40% in the last 30 years

Both organizations will celebrate World Giraffe Day. It’s annual event initiated by GCF to celebrate the longest-necked animal on the longest day of the year – 21st June – every year.