World of Speed Celebrates the 100th running of the Indianapolis 500 Wilsonville, OR. The World of Speed has a new exhibit, “Heroes and History” and it’s a celebration of the 100th running of the Indianapolis 500. The exhibit features 33 Indy cars, dating from 1914 to 1998. This historical showcase features IndyCars from seven decades and tells the stories of the race and its drivers, with the cars displayed on World of Speed’s version of the Indianapolis Motor Speedway “Brickyard.”

The museum curator, Ron Huegli, is excited to talk with visitors about the exhibit. He secured the 33 special Indy cars by reaching out to collectors and the Indy museum. 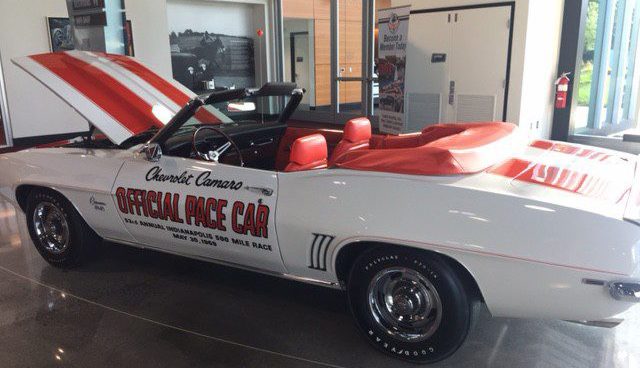 This is a 1969 Chevrolet Camaro Indy Pace Car replica. The museum is a nonprofit and will have its annual SPARK gala on Saturday, September 17, 2016.

Here’s some historical information about the Indianapolis 500:

The Indianapolis 500 is held annually at Indianapolis Motor Speedway over Memorial Day weekend. It is contested as part of the Verizon IndyCar Series, the top level of American Championship Car racing, an open-wheel formula colloquially known as “Indy Car Racing”.  The event, billed as The Greatest Spectacle in Racing, is considered part of the Triple Crown of Motorsport, which comprises three of the most prestigious motorsports events in the world. The official attendance is not disclosed by Speedway management, but the permanent seating capacity is upwards of 250,000, and infield patrons raise the race-day attendance to approximately 300,000.

The inaugural running was won by Ray Harroun and the 100th running was held in 2016. Alexander Rossi is the defending champion. The most successful drivers are A. J. Foyt, Al Unser, and Rick Mears, each of whom have won the race four times. The active driver with the most victories is Hélio Castroneves, with three. Rick Mears holds the record for most career pole positions with six. The most successful car owner is Roger Penske, owner of Team Penske, which has 16 total wins and 17 poles.

About the Museum of Speed in Wilsonville:

The Museum of Speed is an educational museum featuring historic race cars, boats and motorcycles that tell the story of motorsports culture. Through interactive exhibits and hands on activities, the World of Speed offers visitors a behind the scenes view of the racing world. It encompasses many aspects of motorsports, including drag racing, road racing, land speed racing, motorcycle racing, open wheel, NASCAR and hydroplanes.

World of Speed is a 501(c)(3) public charity. The museum is funded by income from sponsorships, foundations, admissions, corporate and individual memberships and from events held at the museum. David and Sally Bany of Wilsonville, were the moving force behind the 80,000-square foot museum and contributed much of the permanent collection.