Portland, OR. The American Diabetes Association and the National Father’s Day Council honored four local dads at the “Father of the Year” awards dinner on June 15th on Center Court at the Moda Center.  Similar events are hosted in cities across the country to recognize men who have made family a priority while balancing demanding careers and community involvement. 2016 Portland Father of the Year Honoree’s are: Terry Porter, (Former Portland Trail Blazer, Men’s Basketball Coach, University of Portland) Jay Haladay, (Retired CEO, Viewpoint Construction Software) Randy Miller, (President, Produce Row Property Management Company) and Michael Snaadt, (Owner, Helen Bernhard Bakery). The dinner is also a fundraiser for the American Diabetes Association because supporters are encouraged to make donations in support of the honored fathers. (Photo credit, Andie Petkus) Cathy Marshall from KGW helped out at the event.

The event offered the opportunity to educate community members about The American Diabetes Association’s mission to prevent and cure diabetes and to improve the lives of all people affected by diabetes. The event supports diabetes education, research and advocacy to benefit nearly 30 million children and adults in the United States who have diabetes. Honoree Terry Porter was joined by his children, Franklin (20), Brianna (23), his wife Susan and Malcolm (18).

Here’s more information about the men who were honored from the The American Diabetes Association:

Terry Porter, a 17-year NBA veteran player and former NBA head coach, was recently named the Head Men’s Basketball Coach at the University of Portland. Terry was a standout for the Portland Trail Blazers and had his jersey retired by the franchise in 2009. A Milwaukee, Wisconsin native, Terry was the head coach of the Milwaukee Bucks for two seasons (2003-05), including leading the team to the 2004 NBA Playoffs. He served one season as head coach of the Phoenix Suns (2008-09) and was also an assistant coach at Minnesota, Sacramento and Detroit. He received the J. Walter Kennedy Citizen Award from the NBA in 1993. Terry graduated from the University of Wisconsin-Stevens Point in 1993, and was named a Distinguished Alumnus in 1999. A long-time team ambassador for the Trail Blazers since his retirement, has not only been a fan favorite from his playing days, but also one of the biggest community contributors of any Portland-area celebrity. He is a Boys and Girls Club Hall of Fame member and still actively participates in many other community ventures. He and his wife Susan have three children Brianna (23), Franklin (20) and Malcolm (18). Jay and his wife Renee have four children, Scott, Miles, Taryn and Gavin.

Jay Haladay has made many positive impacts in his 25 years as a resident of the Portland area.   As a father, an innovative software company executive and real estate developer, his activities have had a very positive impact on Oregon. Jay and his wife Renee reside in Lake Oswego.  Their four children, Scott, Miles, Taryn and Gavin, spent their formative years going through the Lake Oswego school system.  The family came to Portland in 1991 as an extension of Jay’s career in technology.  First with IBM, then later as the owner and CEO of several software firms, the Haladay’s came to Portland so that Jay could focus on one of these firms, Viewpoint Construction Software. For many years, people knew the Haladay’s from sports associated with their children.  As either a coach or as a benefactor, Jay was blending his business life with many hours working with young athletes.  But in these later years, as Jay has focused his time and creativity in new directions, the business leader has emerged. Under Jay’s leadership, Viewpoint grew into one of the largest software firms dedicated to the global construction industry.  In May, 2015, Jay retired from his post as CEO and Chairman of the Board of Viewpoint, but not after seeing the firm grow to almost 800 employees serving 8,000 construction customers in 26 countries.  One of the important elements of Viewpoint’s growth was the positive company culture he developed at the firm, assisted by the active involvement of his three sons in Viewpoint’s operation and management.  Jay received the 2013 Technology Executive of the Year from the Technology Association of Oregon for his work with Viewpoint. Another side of Jay came thought as he developed the RiverEast Center as Viewpoint’s headquarters.  It was a central element of Viewpoint’s vibrant culture and recognized as a catalyst for the growth of Portland’s exciting near in East Side. While retired from his career in technology, Jay continues to devote his time to growing businesses and being a creative developer.  The Haladay family has created 10 Branch, an organization that invests in growing Oregon-based businesses.  10 Branch is also helping downtown Lake Oswego renew itself by taking on a major real estate project. Randy Miller is President of Produce Row Property Management Company and former chairman of the Moore Company.  He is currently serving as the Honorary Consulate to the Republic of Lithuania.

A longtime Oregonian, Randy is a graduate of Lincoln High School, holds a Bachelor of Science in Business Administration from Boston University, and received his Master’s degree from Portland State.

He is a recipient of the Port of Portland Compass Award, the Portland Business Alliance President’s Award and the City of Portland’s Spirit of Portland Award.

He is married to wife Jan and they have four grown children, Kelsey, Haley and twins Clayton and Gregory. 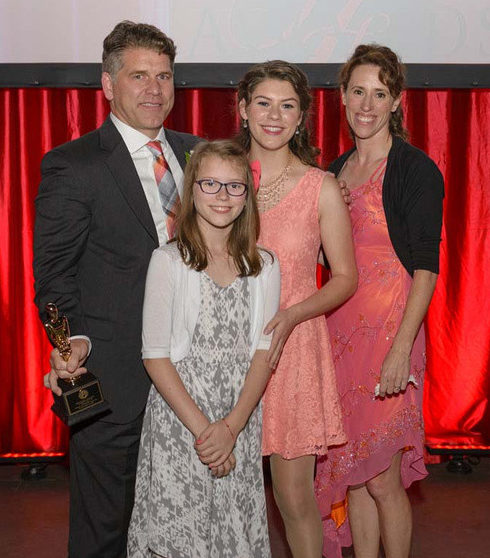 Michael Snaadt has been married to his wife, Kellie, for almost 19 years. They have daughters Delaney (14) and Clarissa (11).

Michael Snaadt was born and raised in Tustin, California.  He left to attend University of Idaho, receiving his bachelor’s degree in business in 1993.  He migrated throughout the northwest as a manager for Consolidated Electrical Distributors for several years.  Meeting and marrying his wife, Kellie, along the way in 1997.  They settled in Boise, Idaho in 2000, and Michael went to work for Square D, an electrical manufacturer.  He worked with local and national sales and engineering for over 10 years.   During this time, he received his MBA from George Fox University.

His first day of his MBA program, his youngest daughter was diagnosed with Type 1 diabetes and at the completion of his degree, in 2010,  they moved to Portland to purchase Helen Bernhard Bakery from Kellie’s parents.  Michael spends much of his free time with his family and is very involved with the junior youth program at his church, assisting with meetings and missions.  Michael also contributes time and treats to Gales Creek Camp, a camp for kids with diabetes, Portland Rescue Mission, Birch Community Services and World Vision.

Michael has been married to his wife, Kellie, for almost 19 years.  He has two lovely and talented daughters.  Delaney (14) and Clarissa (11) are both fantastic students, athletes, musicians and eager participants in their church youth group and mission trips.

For more information on the American Diabetes Association please check out the website.