The Classic Wines Auction Raises Over $3 Million for Six Charities Portland, March 5th, 2016. More than 800 wine lovers gathered at the Oregon Convention Center to drink, eat and bid at the Classic Wines Auction (CWA). The six nonprofits which benefited include: Metropolitan Family Service (MFS), New Avenues for Youth, Friends of the Children-Portland, YWCA Clark County, Randall Children’s Hospital at Legacy Emanuel and Special Olympics Oregon. The Classic Wines Auction (CWA) raised over $3 million dollars. Proceeds from the auction, and other food and wine events put on by the organization, support charities dedicated to youth and families throughout Oregon and Southwest Washington. 2016 Oregon Honorary Wine Ambassador, Jay Somers from J. Christopher Wines, entertains the crowd on lead guitar with his band, Reduction, which is made up of musicians who work in the wine industry. 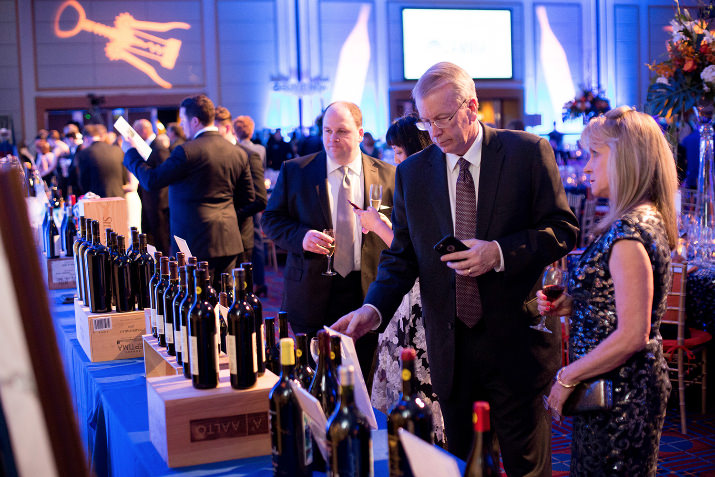 Since 1982, CWA has raised almost $40 million for youth and families in Oregon and Southwest Washington.

“Year after year, our wonderful donors, sponsors, volunteers, charity partners and winemakers come together to make this event a success,” said Heather Martin, Executive Director of the Classic Wines Auction. “We’re thankful for their generous support. It means we can help those children and families in our community who are most in need.”

In addition to the successful auction, CWA also announced today that it was named to Wine Spectator’s annual list of the top charity wine auctions in the country. This year, CWA moved up slightly to No. 8 on this distinguished list.

“The recognition from Wine Spectator is a testament to our organization and its fundraising success,” Martin said. “It’s an honor for our event to be included among these prestigious auctions.”

Consistently recognized as one of the top ten charity wine auctions in the country by Wine Spectator magazine since 2001, the Classic Wines Auction has raised almost $40 million for Portland-area charities since its inception in 1982. Based in Portland, OR., First Growth Children and Family Charities is a nonprofit organization dedicated to producing the Classic Wines Auction and related food and wine events to raise funds for local charities benefiting children and families, including: Metropolitan Family Service (MFS), New Avenues for Youth, Friends of the Children-Portland, YWCA Clark County, Randall Children’s Hospital at Legacy Emanuel and Special Olympics Oregon. For more information about the Classic Wines Auction and each of its annual fundraising events, visit www.classicwinesauction.com.