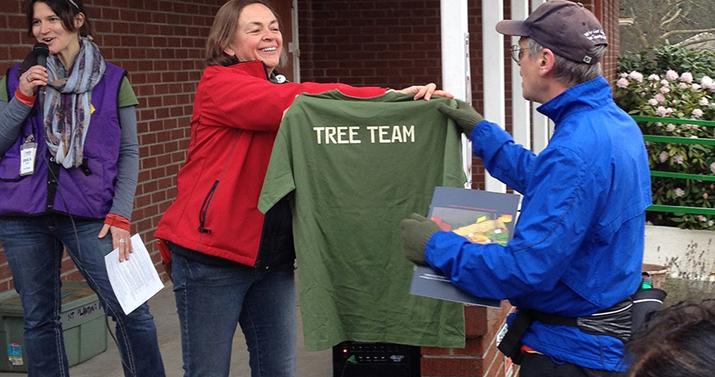 Portland, March 23rd, 2013,. U.S. Rep. Earl Blumenauer inspired more than 100 volunteers set to plant 200 trees in Portland’s Vernon and Concordia neighborhoods, sending them off with praise for Portland, its green innovations, and the legacy the planters would leave for future generations.

In reflecting about what makes Portland special, Rep. Blumenauer praised NW Natural, which generously sponsored Saturday’s planting, and Portland General Electric, which has supported Friends of Trees for decades and whose Renewable Power Program Manager Thor Hinckley is a Friends of Trees board member.

“Our local utilities are among the national leaders in trying to do things differently,” said Rep. Blumenauer. NW Natural “took the lead in a program to change the way we pay our gas bills … so there was actually an incentive to save. Before that, they were penalized if there was conservation.” About PGE he said, “We probably have more per capita green energy voluntary bill payers in Portland, who pay a little bit more to support energy sources that are easier on the planet” than anywhere else. And now, if you sign up for Paperless Billing, “they’ll kick in a buck so we’re saving a tree and we’re planting a tree.” About trees and their impact on our stormwater management system, Rep. Blumenauer said, “There’s a reason why the Bureau of Environmental Services is involved with supporting this [tree planting]. Because the more that we are able to build the green infrastructure, it’s not just that we’re getting help with climate change and greenhouse gas emissions, but trees act as sponges—the root system, the leaves— … and the city has made the rational decision that the more they can help this effort in greening the city, the less we have to worry about stormwater getting into the sewer system. … It’s part of the Portland approach.”

While jogging to the planting that morning, Rep. Blumenauer said he saw “the legacy that the people 20, 40, 60, 100, 120 years ago planted that we’re enjoying today,” and he recalled the “poetry” of the presentations that Heritage Trees Program founder Jane Glazer gave to Portland City Council when he was a city commissioner, which highlighted the history of many Portland trees.

After being presented with an honorary Friends of Trees “Tree Team” T-shirt, Rep. Blumenauer lifted the shirt up and said, “I’m going to wear it when I run on the mall next month.”

Friends of Trees is honored that Rep. Blumenauer, a longtime advocate for the environment and urban forestry, came to our planting and spoke so eloquently about the importance of planting trees.

The slide show above of Rep. Blumenauer and Saturday’s planters was provided by Friends of Trees Board Member Nancy Buley, Communications Director for J. Frank Schmidt & Son Co., and FOT volunteer Mark Ferris.